A tense exchange between an American Airlines employee and a disruptive traveler was captured on video then posted to TikTok Tuesday – another in an ongoing slew of recent unruly air passenger incidents.

In an apparent recent dispute at DFW International Airport in Dallas over wearing a mask on a flight, a passenger insulted an airline worker, calling the woman ‘a b***h.’.

A gate attendant interjected: ‘You can find another airline to fly, I’d suggest (taking) Spirit (airlines)’.

He tells the unidentified woman in the video, the comments were ‘totally uncalled for, totally inappropriate, we don’t tolerate that crap.’

When the woman attempts to deny her use of profanity, he says, ”Don’t lie. You already did that once, when you took your mask off and put it in your pocket.’

‘If you don’t follow procedure, it’s end of discussion,’ he tersely added, before turning her away from the gate. 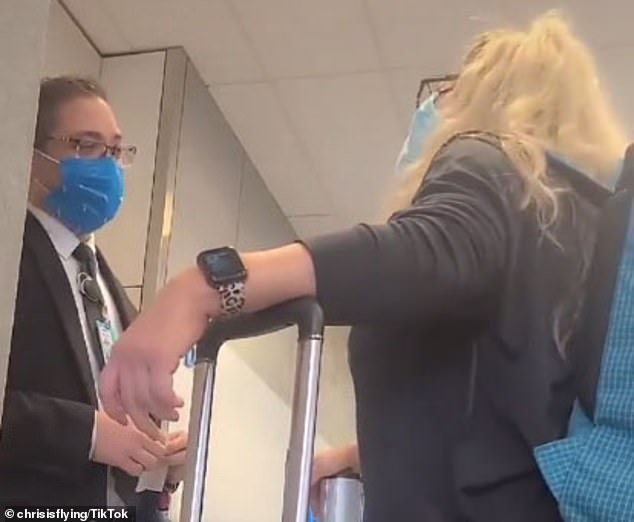 ‘You can find another airline to fly, I’d suggest (taking) Spirit (airlines)’ the employee told the unidentified woman, who had just previously called his co-worked ‘a b***h’ 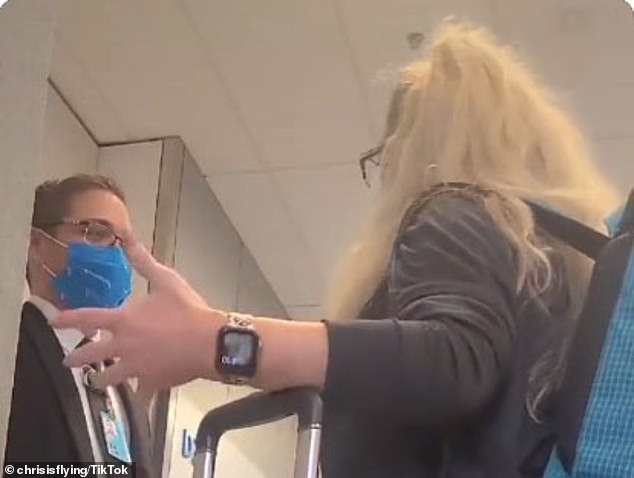 ‘Don’t lie,’ the airline worker told the woman when she attempted to deny her use of profanity. ‘You already did that once, when you took your mask off and put it in your pocket’

Tuesday’s scene has become an unfortunately familiar one for most airline workers, with the Federal Aviation Administration reporting nearly 100 cases of unruly airline passengers in the past week alone.

According to updated figures released by the FAA Tuesday, there have been 3,509 unruly passenger reports in 2021. The majority of the reported incidents – 2,605 to be exact – are related to ‘noncompliance with the federal mask mandate that remains in place for flights and public transit.’

Meanwhile, out of those reports, 581 investigations were initiated into the incidents. Of those investigations, 87 resulted in some kind of penalty. 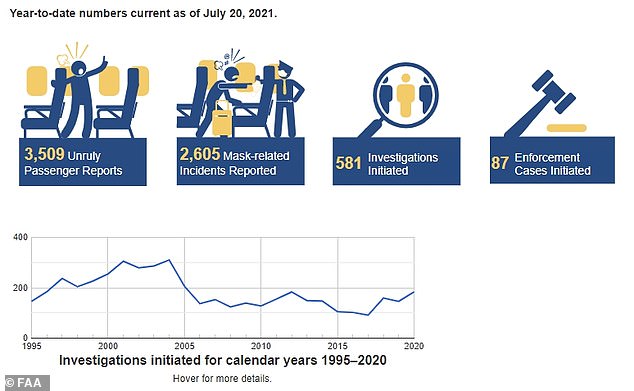 Under federal law, no passenger may ‘assault, threaten, intimidate, or interfere with a crew member in the performance of the crew member’s duties aboard an aircraft being operated.’

The FAA also may impose fines up to $37,000 per violation in unruly passenger cases.

The Hill reports that the agency issued a $10,500 fine to a passenger who refused to wear a mask onboard earlier this month. 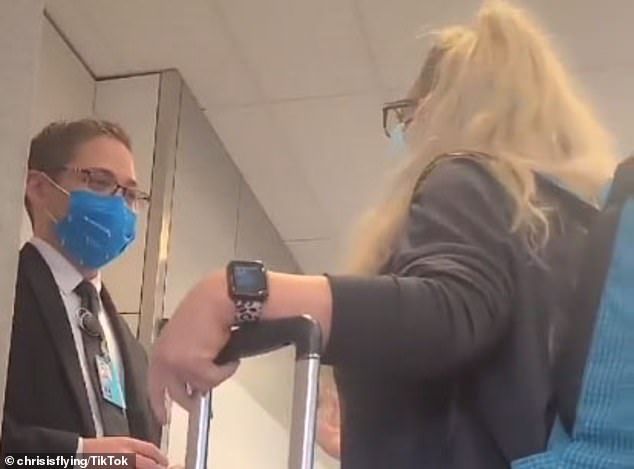 The FAA issued a $10,500 fine to a passenger who refused to wear a mask onboard earlier this month.

The July 8 report said another eight passengers either refused to wear a face mask, consumed alcohol they brought onto the plane, or assaulted passengers or flight crew members.

Combined, those nine passengers received a total of $119,000 in fines.

Darby LaJoye, Transportation Security Administration acting administrator, said Tuesday that there had been more than 85 reported physical assaults against TSA agents since the start of the COVID-19 pandemic last year. Twenty-five of the assaults have been reported since the end of May alone.

‘Passengers do not arrive at an airport or board a plane with the intent of becoming unruly or violent,” LaJoye said in a statement. “However, what is an exciting return to travel for some may be a more difficult experience for others, which can lead to unexpected, and unacceptable, behaviors.’

In response to ongoing reports and incidents of unruly passengers, including one last month where a man bit two TSA officers in Denver, the TSA announced plans to resume self-defense training in early July. It had been postponed in the coronavirus pandemic last March.

It was not clear whether or not the woman from Tuesday’s TikTok video received any kind of fine or punishment.