Three days after his Georgia side played South Africa in July, Levan Maisashvili tested positive for COVID and was rushed to hospital. His lungs ha


Three days after his Georgia side played South Africa in July, Levan Maisashvili tested positive for COVID and was rushed to hospital. His lungs had collapsed and his body was engulfed by deadly bacteria. He expected to die.

Doctors were forced to put the 51-year-old into an induced coma for a month. They gave the stricken head coach of the East European nation a one per cent chance of survival. His family and friends, players, staff, employers and supporters feared the worst. His life hung by a thread.

But in defiance of the bleak medical prognosis, Maisashvili fought back and recovered. He refused to surrender to the virus. Two months after being admitted to Morningside Hospital in Johannesburg in a critical condition, he emerged from the nearby Milpark Hospital – where he had been transferred for specialist care – and made an emotional return to Tbilisi. 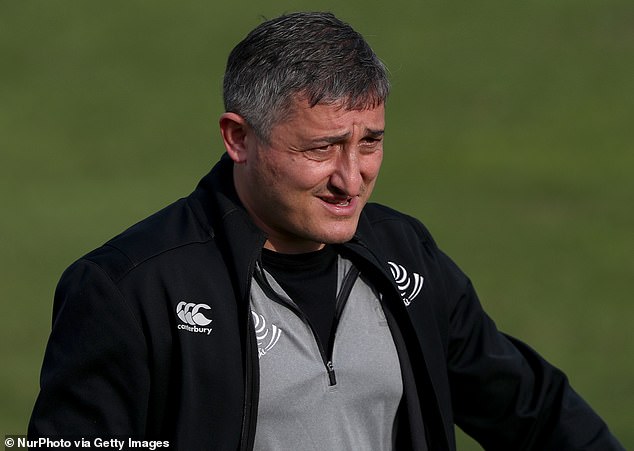 Speaking to Sportsmail from his home, Maisashvili recounted the frightening episode. ‘I had this feeling that I would die,’ he said.

‘Everything happened very quickly, for me but not for my friends, for my managers, for my family and for my doctors. They spent every day for approximately 40 days waiting, thinking I would die. It was natural because all of my body had collapsed.

‘I tested positive for COVID on July 5. Our team doctor, Nutsa Shamatava, sent me to hospital, because I had a temperature. For the first three or four days, it wasn’t difficult for me, but after that it was very bad.

‘It was a terrible situation for me. The doctors who were looking after me were absolutely excellent and they did everything for me, but three or four times, because my condition was so critical, they said I had just one per cent chance to survive.

‘My lungs had fully collapsed, I had bacteria in my blood and I had fungus in my blood. Every bacteria has antibiotics which you can use to fight against it, but one sort of bacteria is absolutely terrible and I had that in my body; in my blood, in my lungs, everywhere. It was all because of COVID.

‘They had to give me drugs which made me sleep, because I was connected to an oxygen machine. The doctors said to me, at that time they were blowing with 100 per cent oxygen but my blood oxygen saturation level was lower than 80 per cent, which is catastrophic. That’s why I was on the drugs. For two weeks after that, every time I woke up I had the shakes like a drug addict!’

While in a coma, Maisashvili was unaware of the desperate extent of his predicament, but when he came out of it, the ordeal was far from over. He described the next month as ‘hell’. 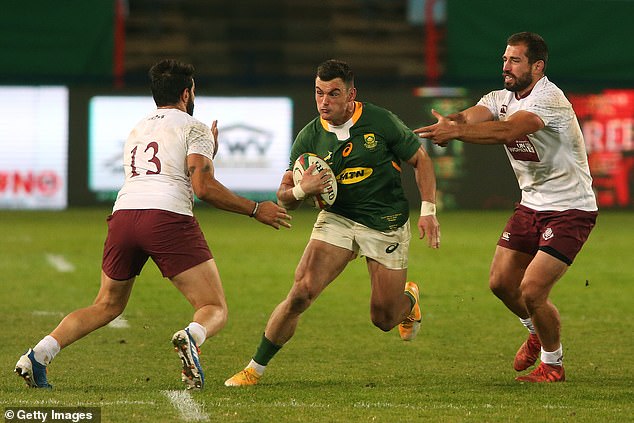 He was shocked to find tubes sticking out of his nose and throat, and medical apparatus all over his body. He was even more shocked to discover that his weight had plummeted from 85kg to 60kg. ‘When I saw my legs and face, I didn’t recognise myself,’ he said.

Every single step of his initial rehab was a shattering effort. ‘At that time, I could only stand up with the support of my physio,’ he said.

‘I did one step forward, one step back then I would sit back in my chair with a high heart-rate. But I said to myself, “If I am going to fight for my life and fight this condition, I will be crazy about it”. You can never give up; you can fight for everything. 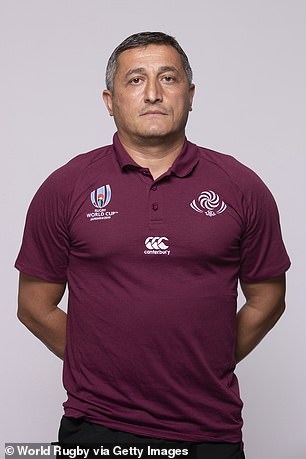 While in a coma, Maisashvili was unaware of the desperate extent of his predicament

‘Every day, someone was coming in my room at the hospital and asking the question, “Do you remember me?”. They were showing me as the guy who was dying, but I didn’t.’

He is still moved when he recounts all the help and support he received. Maisashvili describes the doctors, nurses and physios who saved his life and helped him return home as ‘the biggest friends I have’. So many people played a vital part.

All the local doctors provided heroic care; Dr Evan Shoul, Dr Shiraaz Bhamjee, Dr Kerry Coole, Dr Martin J Sussman. A Georgian doctor based in South Africa, Dr Vakhtang Rekhviashvili, was another key figure. Robyn Keyser was the physio who worked so tirelessly on making him mobile again. And his union ensured he was never alone, even after the team flew home without him.

‘Every day, my doctor – Nutsa Shamatava – was with me,’ he said. ‘After that, the union sent vice-president Nika Alavidze, who stayed for two weeks when I was sleeping all the time. After that, my team manager, Leqso Iordanishvili, spent all the time with me.

‘Every day from 11 until 8pm, he was sitting with me, speaking and gently encouraging me. I cannot explain how important that was. Every time I was walking three or four steps, he would say, “Oh Levan, that is so good”. When I look back; that was the biggest support which always helped me.

‘I had big support from the union and the president, Ioseb Tkemaladze, from my family, from my friends and also from people I don’t know. When I started looking at my Facebook and messages again, there were a huge number of messages from people, supporting me and encouraging me. There was a lot of support from other countries. Rugby doesn’t have nationality; rugby men are rugby men, in whichever country you are from.’ 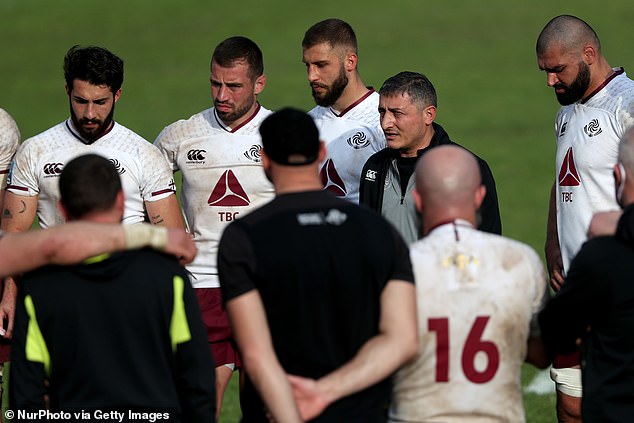 Maisashvili looks back on his near-death experience with gratitude rather than any sense of bitterness about what happened. There was a COVID outbreak in the Georgia camp despite strict protocols being followed. At least the head coach survived. Not everyone did.

‘After arriving in South Africa, we spent two weeks absolutely isolated,’ he said. ‘We were tested four times per week. The majority of our players were vaccinated. We also had very good protocols because we had participated in the Autumn Nations Cup, so we learned good lessons from that.

‘So we knew what to do, but no-one has a guarantee. All our team were absolutely clear when we came to Johannesburg and I don’t want to speak about who was the reason (for the outbreak) but the first case was a liaison officer, an African guy, and I’m sorry to say that he died. I have no idea how I caught it. Maybe I was sitting behind him when we travelled from Johannesburg to Pretoria.’

Having recovered far quicker than the doctors thought he would, Maisashvili was cleared to return to Georgia early last month and his home-coming was a moving occasion. ‘It was absolutely amazing,’ he said. 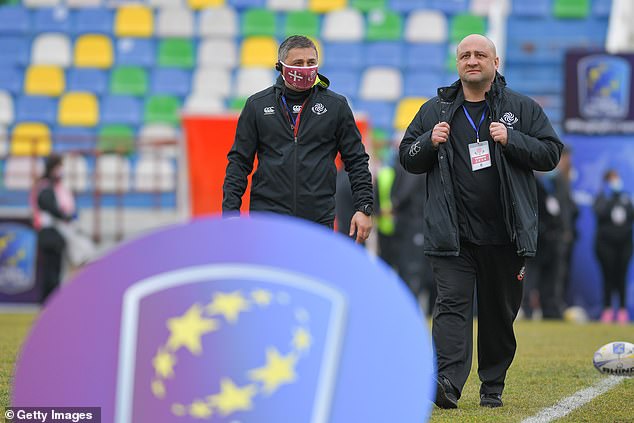 ‘There were a lot of people waiting for me; my players, my team-mates (coaching staff), friends, family, people from the union and other people who were just there to support me. It was a huge emotion for me.’

His breathing is still laboured when he talks, but Maisashvili’s condition is improving all the time – so much so that he is easing back into work mode again. He will take charge of Georgia for their autumn Tests against France and Fiji and sees it as a continuation of his therapy.

‘It will be better when I am back on the field again,’ he said. ‘It is not natural for me to stay outside the pitch! I think it will help my recovery to go back into my job.’

All of rugby will welcome him back and wish him well, after his gruelling, near-death ordeal.