Jon Rahm has opened up about his misery at missing the Tokyo Olympics over a positive Covid test, claiming he can ‘guarantee’ he didn’t have the illness and casting doubt on the testing process.

The world No 1 had had his fill of Covid-related disruption after the extraordinary scenes at Muirfield Village in June, where he was forced to withdraw from the Memorial Tournament after testing positive.

Rahm was leading by six shots after the third round when he was told he had to leave.

Yet despite claiming he felt ‘invincible’ following his first bout of Covid, Rahm was ejected from the Olympic golf competition after testing positive for a second time in as many months.

Speaking for the first time since his Olympic dismissal, Rahm expressed his frustration at the protocols in Tokyo that meant he had to miss out and said missing the Games was ‘harder to digest’ than the Memorial incident.

‘I’ve done everything the system tells me to do,’ the Spaniard said at Liberty National. ‘I got all my negatives. First one on Thursday negative, Friday negative, Saturday I get my first positive. 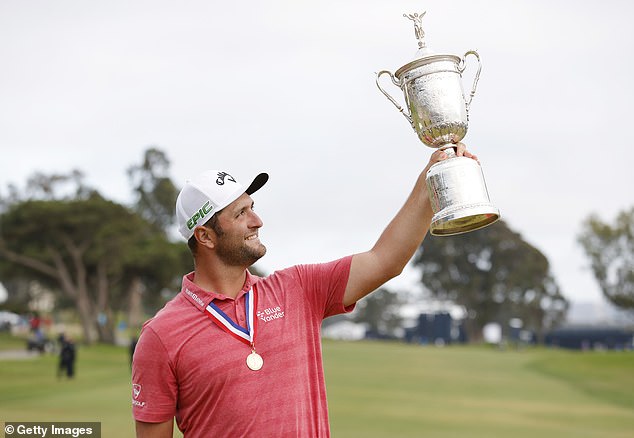 Rahm holds up the US Open trophy, his first Major victory, shortly after the Memorial disaster

‘And then they tested me again that same day, and I apparently was positive again. Then I got tested the next two days. One was the saliva test, one was PCR, both negative. Got an antibody test done, so blood test, and I had the antibodies.

‘So I can’t really explain what in the world happened. I don’t know if it’s false positives or just what I had leftover from when I had Covid, just dead cells that were in there that we all know can happen.

‘There’s a reason why the PGA Tour won’t test you for a while after you’ve had Covid.’

Rahm, who won the US Open shortly after his torrid end to the Memorial, is adamant that despite the test results, he did not have the virus in Tokyo.

‘I wasn’t ill. I can guarantee you I didn’t have Covid this time, not at all,’ he said. 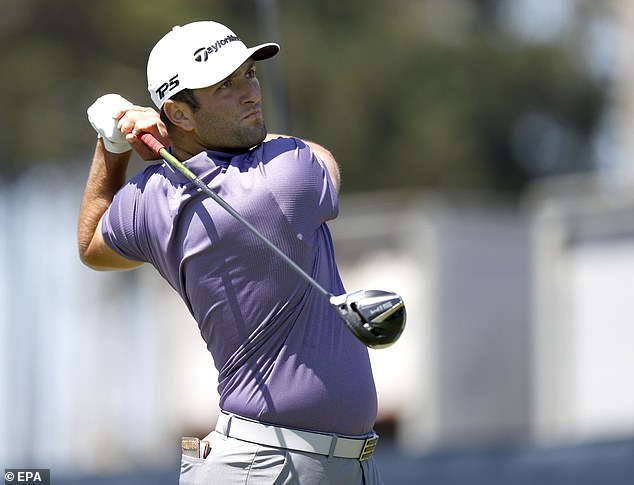 ‘I had five tests done, four of them were negative, one was positive. That first time I did have Covid, barely any symptoms, but I had it. This time I had nothing.’

Rahm admitted that he remains upset at missing the chance to win Olympic gold.

‘(It) still makes me a little sad, I’m not going to lie,’ he said. ‘I’m going to have to wait three more years hopefully to qualify for the Olympics, but I was really ready for this one.

‘Hopefully, I don’t have to deal with any of that ever again hopefully, Covid related, and I can just keep playing golf and doing what I love and contend for tournaments.’