The new king of Scotland is back from Las Vegas and soon he will recall the time he morphed into the Queen.

‘A steak bake or a chicken bake,’ a peckish Josh Taylor asks fiancée Danielle. ‘You didn’t get any of them (in Vegas), no. Nice, massive slices of pizzas though.’ 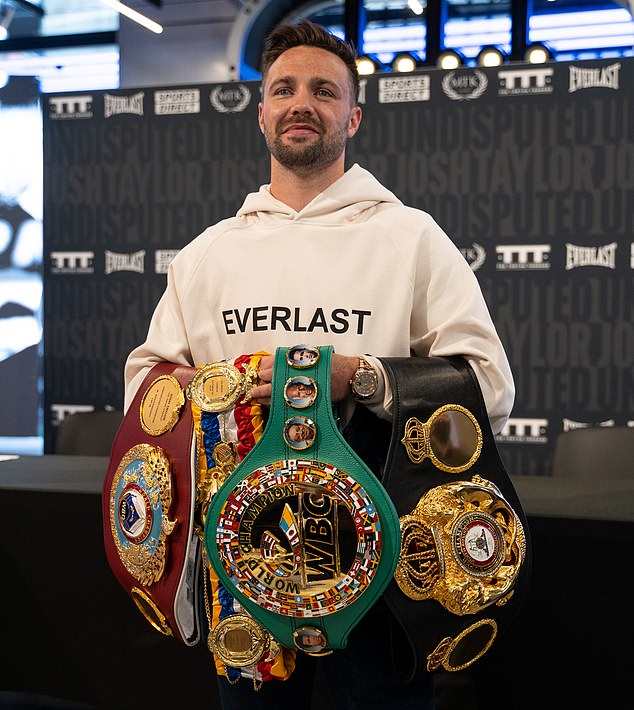 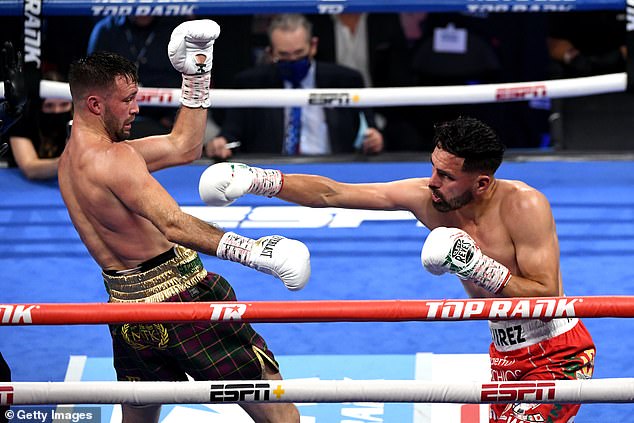 He is down in London for the latest leg of a victory tour that began in the bars of Sin City before moving to his hometown of Prestonpans. There, a few miles outside Edinburgh, he enjoyed a hero’s return at a social distance.

‘Because I had to go home and isolate, I couldn’t do anything,’ Taylor recalls. ‘I had to just sit in the car and wave – I felt like the Queen!’

He mimics her majesty’s cupped hand.

‘I just wanted to get out and embrace it. It was my whole hometown out for me and I felt I kind of let them down because I couldn’t get out of the car and go and embrace it – celebrate with them, take pictures…’

He did eventually manage a day on the motorbikes with father Jamie. But after scaling boxing’s highest mountain, perhaps it was never going to be a simple route back down to earth.

Victory in Vegas meant Taylor, already the IBF and WBA light-welterweight champion, secured the WBO and WBC titles, too. Now, after only 18 bouts, the 30-year-old sits among just five fighters to achieve undisputed status in the four-belt era.

The first from these shores, his place in British sporting history is already secure. Still, though, some items on Taylor’s bucket list remain unchecked. For one, that helicopter ride over the Grand Canyon continues to elude him. 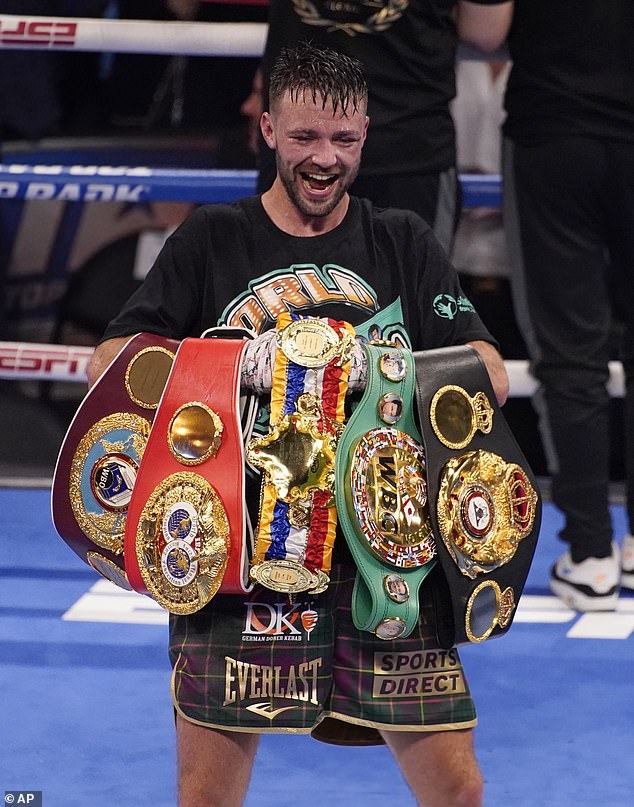 ‘I never had time! I was on the drink,’ he says. ‘Me and the lads, after the fight, we went out and we partied to all hours in the morning. The next day we were lying on our bed, hungover. Rough.’

He adds: ‘We had a pool party booked and were like: “I can’t be bothered with this”. But we went and ended up out that night as well. Then, on the Monday, I went to my bed and came home. Rough… but we’ll be back, we’ll be back.’

And maybe next time he will fare better on the casino floor, too.

‘I had a little bit of a gamble – I tried to play craps. I just don’t understand the game,’ Taylor jokes. ‘So many bets, so much stuff to do. I just didn’t understand it. I just got the dice, chucked them and as long as you don’t roll a seven, you’re fine. Some money kept coming but then I lost it all – as you always do.’

Not that he will need it if this Tartan Tornado continues apace.

‘Big Cosmo!’ Taylor says. ‘He messaged me.’ It prompted a random meeting with Logan Paul, that flag bearer of boxing’s bizarre flirtation with video stars.

‘I am sitting in the lobby of the hotel and he walked in,’ Taylor recalls. ‘I went: “That looks like that Jake Paul, or Paul Logan or whatever… we had a wee bit of a laugh and a carry on together.’

Victory over Ramirez also served as a good excuse for a reunion. A few days after sitting down with Sportsmail, Taylor welcomed Ken Buchanan back into his home. Scotland’s two undisputed champions under one roof.

Buchanan once reigned supreme at lightweight. Now 76, he lives in a care home, suffering the suffocating effects of dementia. The pair posed for pictures in front of Taylor’s trophy cabinet which, even after beating Ramirez, was briefly empty. 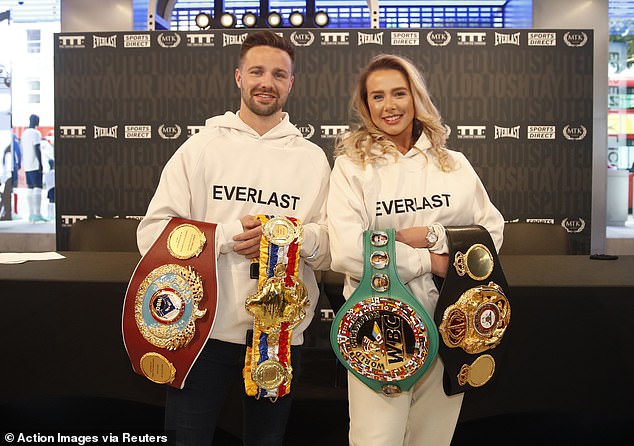 The 30-year-old Taylor poses with his belts alongside his fiancee, Danielle Murphy

When the 30-year-old landed back in the UK, he realised his belts were still Stateside. They were eventually spread across the slots carved into his living room wall. ‘Putting the two extra ones in their place, that was cool.’

Beyond that, though, has life felt much different? ‘I’ve not really had a minute to reflect,’ Taylor says. ‘When you do get a little minute to yourself, or you see yourself up there (he points to images of himself in this Sports Direct store) you go: “Wow, J***** C*****.” Then you think about your achievement: “F****** hell, I’ve done it man. What a piece of history I’ve made.”’

Still there are worlds left to conquer. Taylor is targeting fights at Edinburgh Castle, Easter Road and Madison Square Garden. ‘I want to go back to Vegas and take my fans, my friends, my family. Take the travelling support and the party,’ he adds.

Before long, he will also move up to welterweight, with a mouth-watering fight against Terence Crawford on the horizon. 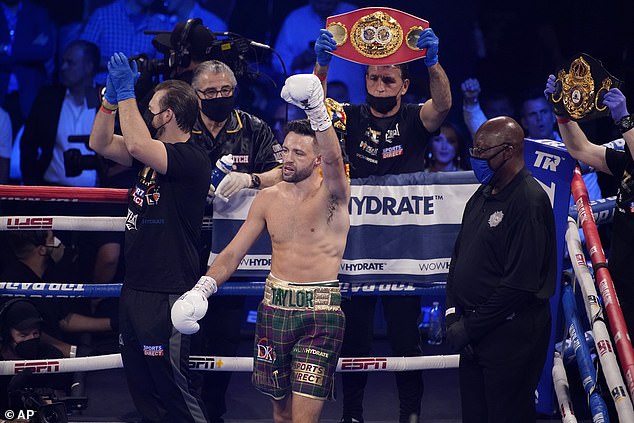 Taylor has big plans going forward – before long, he will step up to welterweight level 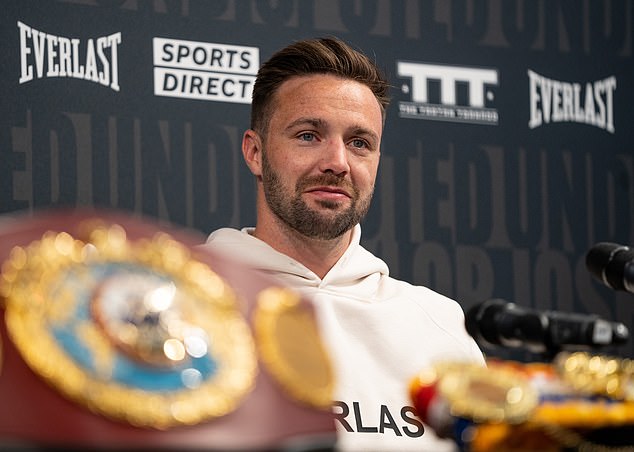 ‘I had that motivation there before the fight,’ Taylor says. ‘I do a thing: manifesting stuff, writing things down. New goals. Even before the (Ramirez) fight, I was writing down on bits of paper: Josh Taylor, two-weight world champion. That’s my next goal, I want to move up to 147 and maybe challenge for greatness. Real greatness.’

Any more come true and he’ll have to cut more slots in that living room wall.