‘It’s maybe the best performance I’ve ever seen from a striker’: Kristoffer Ajer praises Ivan Toney after the goalscoring machine’s latest star turn in the Premier League against Wolves


Brentford defender Kristoffer Ajer heaped praise on striker Ivan Toney after Saturday’s 2-0 win at Wolves but his own reaction to making a goal-saving challenge on Hwang Hee-Chan spoke volumes about the mentality that earned three points.

Toney was the star of the show but a collective defensive effort was needed after the break in order for the Bees to claim their first Premier League away win.

Wolves took on new life after the half-time introduction of Hwang, and Brentford were pegged back for long spells after Shandon Baptiste earned a second booking in the 65th minute. 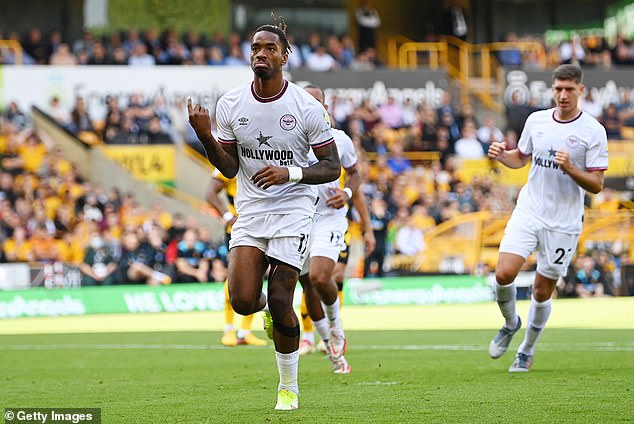 Hwang was a constant threat, but his best opportunity was thwarted when Ajer slid in to nick the ball away in front of goal before celebrating as if he had scored himself.

‘We work so much on defending every single week,’ said the Norway international, a summer signing from Celtic. ‘The assistant manager (Brian Riemer) is crazy about defending. We look at it every day.

‘The players you play against in the Premier League have so much quality but I think we’ve allowed zero shots on target away to one of the best attacking sides in the league. We should be very, very proud of the defending.’

Toney terrorised the Wolves defence, winning and scoring a 28th-minute penalty before teeing up Bryan Mbeumo for the second just six minutes later. He also had two goals disallowed for offside and handball respectively in the first half.

And he was just as important after the break, chipping in defensively but also providing a crucial outlet as Wolves tried to peg Brentford back, with Bees manager Thomas Frank awarding the performance ’10 out of 10′.

‘Ivan’s performance, for me being involved in the game, it’s maybe the best I’ve ever seen from a striker,’ Ajer said.

‘He kept the ball up there, he won every single duel, he scored, had an assist, he was fantastic in his performance.

‘You look at Bryan (Mbeumo) as well, the way they linked up. We were defending sometimes with five at the back so you need someone to keep the ball further away.

‘They work so hard together and helped keep the ball every single time so it makes it easier for us.’