Napoli are flying in Serie A but can the Milan sides or any of their other rivals catch them?

There has not been a Serie A champion from southern Italy in over 20 years. Napoli may need to wait another 30 games to find out their fate but the


There has not been a Serie A champion from southern Italy in over 20 years. Napoli may need to wait another 30 games to find out their fate but there is faith that the south can rise again.

After all, Luciano Spalletti’s side are playing like champions. Frustrated for so long by a stubborn Torino side on Sunday, Victor Osimhen’s late leap sparked jubilant scenes to keep the Partenopei’s 100 per cent record going at the top of the table.

In eight games, Spalletti’s Napoli have eight wins, conceding just three goals since the campaign began in the middle of August. The southern Italian side have also been broken past just once in their past five games. 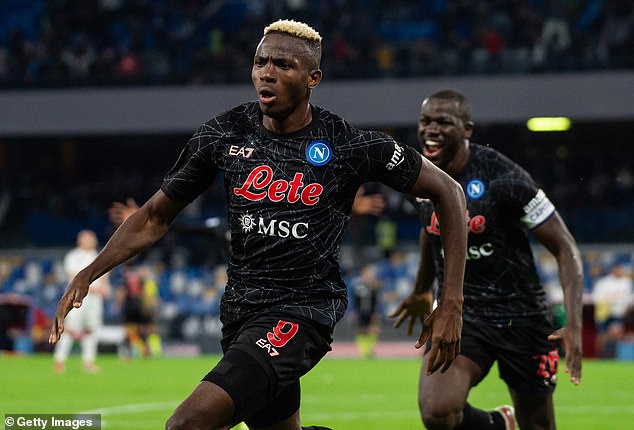 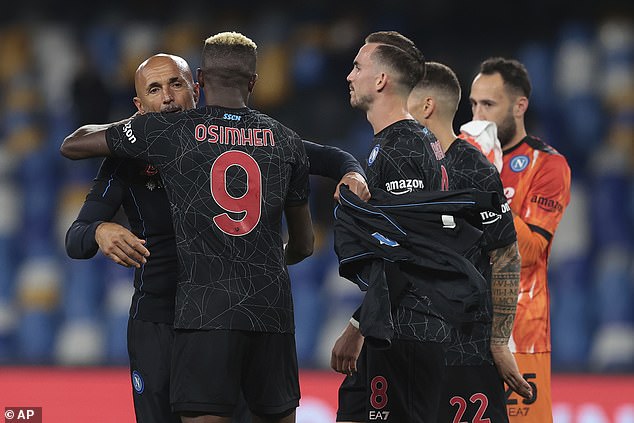 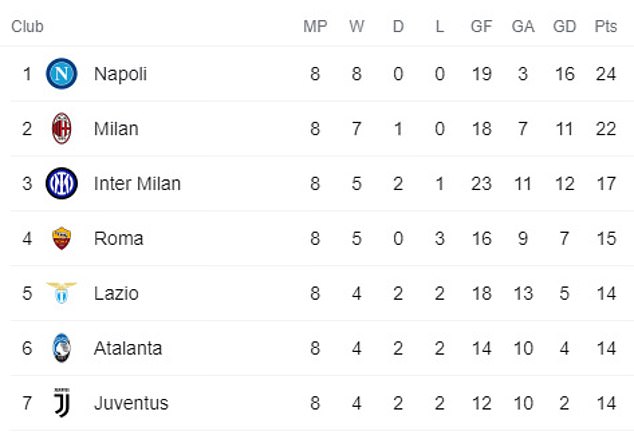 But the most impressive thing about Napoli’s start has been going forward. Spalletti’s men average more than two goals per game but their potency is not defined by a singular figure in front of goal – such as Osimhen – who has scored five out of the club’s 19 league goals so far.

The eight Serie A matches so far have seen ten different goalscorers find the net. Even their two first-choice centre-halves – Kalidou Koulibaly and Amir Rrahmani – have found the net more than once since the start of the season.

The midfield combination of Fabian Ruiz and former Fulham midfielder Andre-Frank Zambo-Anguissa is working so well that Spalletti has asked Italian media not to speak about the latter in order to keep him as a hidden gem in this Napoli side.

Spalletti’s Napoli are ultimately a goalscoring machine, and all should be well for the Serie A leaders. But you would forgive the Partenopei for being a little anxious. 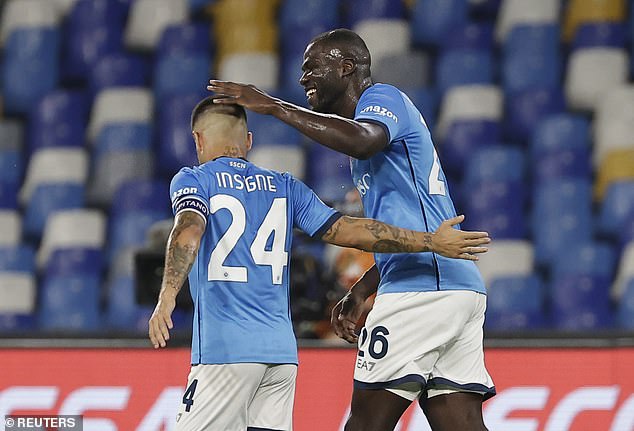 The last time they topped the Serie A table in this manner was back in the 2017-18 campaign, which also saw them win their first eight league matches of the season when Maurizio Sarri was manager.

In fact, their situation after eight games back in 2017 was identical to the scenario they have now. Two points ahead of a second-placed Milan side, with a slow-starting Juventus – managed by Massimiliano Allegri – lying further back in the table.

What was to follow was agonising for Napoli, who ended the season on 95 points with three defeats to their name all term – but in second place behind Juventus, who caught up to clinch the Scudetto title.

The other frustrating part for Napoli is the Milan side in second place this season is refusing to leave them alone at the top. Back in 2017 it was Inter, this time it is AC.  Stefano Pioli’s men have dropped points just once so far this season, with their only slip-up coming in a 1-1 stalemate at Juventus. 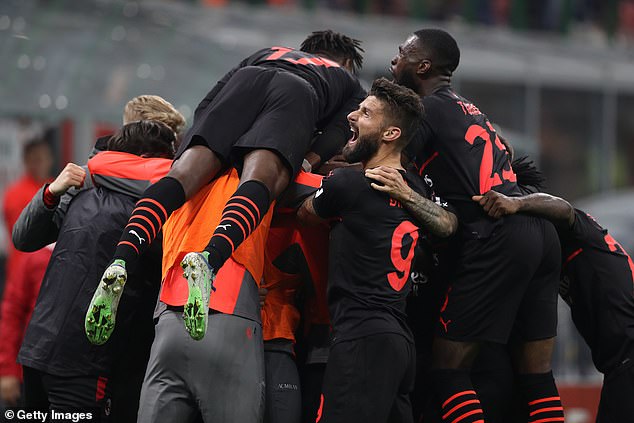 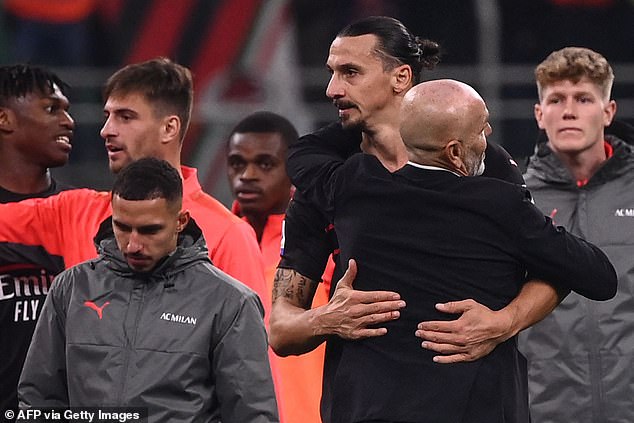 Unlike Napoli, the Rossoneri have a tendency of leaking goals – Milan have kept just two clean sheets all term – but the red half of the San Siro certainly make up for it with their impressive firepower up front.

Pioli has the likes of Brahim Diaz, Rafa Leao and Olivier Giroud fit and firing at the top end of the pitch, though they are complimented in competition by Alexis Saelemaekers, Ante Rebic and a certain Zlatan Ibrahimovic, who is playing very much a back-up role this term.

Like league leaders Napoli, the Rossoneri’s goals come from all over the pitch. Full-backs Davide Calabria and Theo Hernandez are not afraid to get on the scoresheet, while Frank Kessie’s recent displays are alerting Europe’s elite clubs.

What is particularly impressive about this AC Milan team is that they have suffered 14 absences since the start of the season, whether they be injury-related or down to coronavirus diagnoses – but Pioli’s side have carried on winning. 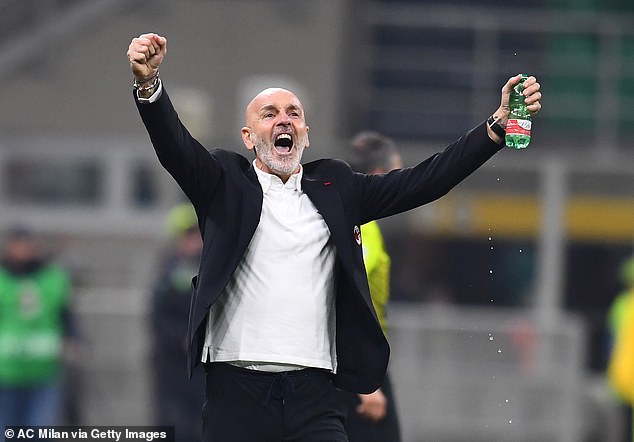 Milan’s squad depth has been tested but has not provoked a defeat so far, meaning they can balance both their Serie A and Champions League exploits should they get through a tricky group stage.

But when it comes to Italian football: it’s never over until the Old Lady sings. Massimilano Allegri’s return to Juventus got off to the worst possible start with no wins from their opening four league games – but things are looking up again.

Juventus are back at it with Allegri firing the club to six straight victories in all competitions, including a Champions League victory over European champions Chelsea last month. 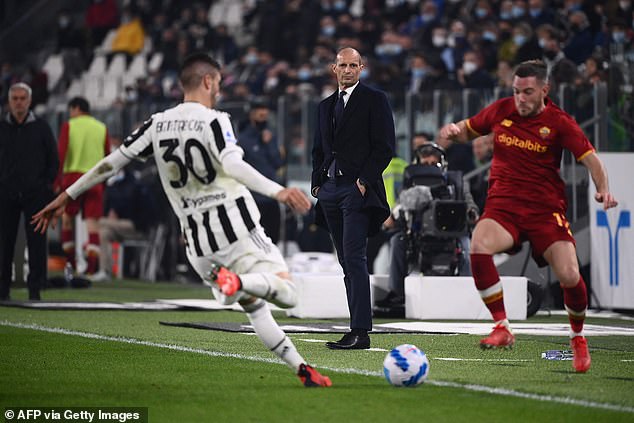 A lot was made about the loss of Cristiano Ronaldo to Manchester United over the summer, but Juventus’ incoming signings are starting to work their magic in Turin.

Italy’s Euro 2020 hero Manuel Locatelli has hit the winning goal in two out of Juventus’ past three matches while another new-ish recruit, Moise Kean, is rebuilding his confidence in Serie A and is going some way to filling the void left behind by Ronaldo.

Meanwhile, Juventus are far more solid at the back compared to the start of the season. Goalkeeper Wojciech Szczesny is ironing out his mistakes and was the penalty-saving hero against Roma at the weekend, while Giorgio Chiellini, Leonardo Bonucci and Mattijs de Ligt are being rotated wisely by Allegri in the back four. 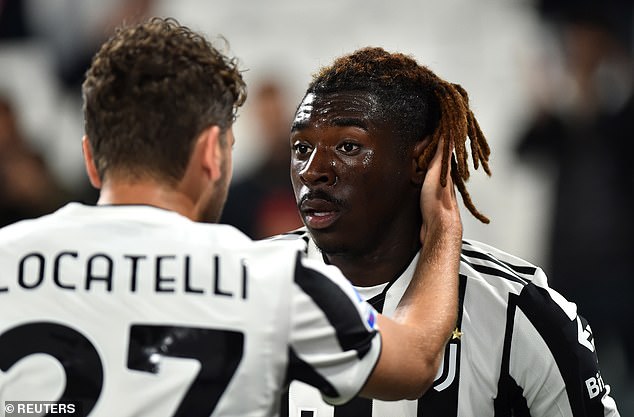 As Allegri revealed on Wednesday night after a slender European win over Zenit St Petersburg, the Old Lady are far from convincing, nor they are the finished article.

But the Turin club are undergoing a similar mid-season rebuild that they have done in the past under their Italian coach – and gone on to win the title.

Juventus’ next litmus test comes in the Derby D’Italia this weekend against Inter Milan, who  have certainly steadied a ship that was rocking over the summer.

The departures of Antonio Conte, Romelu Lukaku and Achraf Hakimi – along with volatile protests towards owner Steven Zhang and financial trouble at the club – threatened to throw all their good work last season into the fire pit. 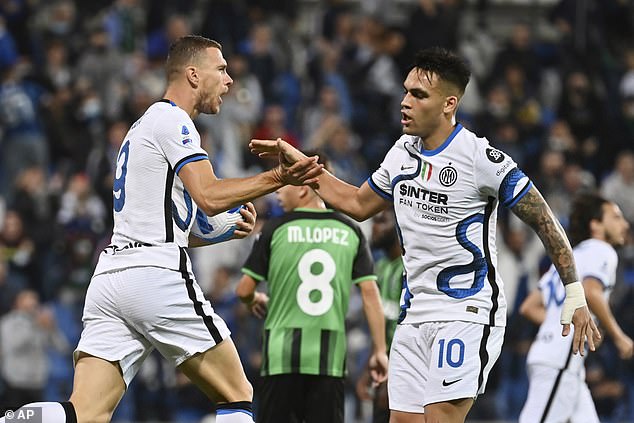 But last year’s Serie A champions have been smart in their decision-making to keep them in touch with the top.

The appointment of Simone Inzaghi was a masterstroke move by the under-fire Zhang, with the Italian head coach known, mainly due to his Lazio days, for improving an ageing playing squad without using too much transfer muscle.

That’s why new recruit Edin Dzeko has been on fire for Inter since the start of the season, with Inter’s new No 9 scoring six times in the club’s first eight games, eclipsing the goal tally of fellow strike partner Lautaro Martinez, who has five.

Denzel Dumfries, who impressed for Holland at Euro 2020, has impressed at right-back as the new Hakimi, meaning Inter have made smart replacements for their outgoing stars, whilst building on the good work made by Conte last term. 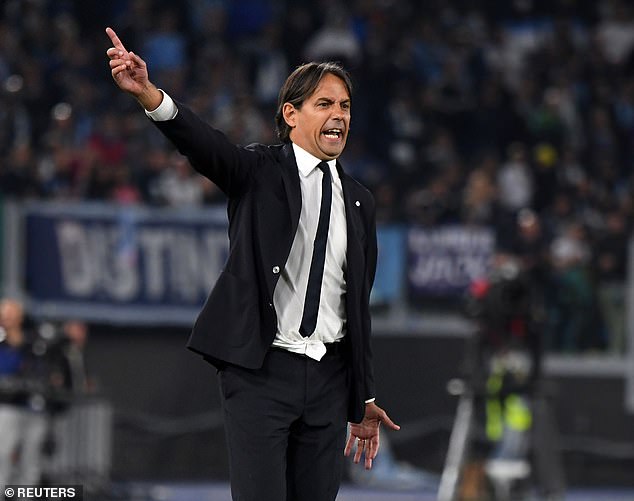 Only a 3-1 defeat to Inzaghi’s former club Lazio over the weekend has seen the Nerazzuri’s good work stall, with new Biancolesti coach Sarri building on the good work by his predecessor.

Recent victories over Roma and Inter show that Lazio are still a side for the big occasion. Sarri has come in and changed the Biancolesti’s formation from a back three to a 4-3-3 set-up Chelsea fans saw during the Italian’s Stamford Bridge stint – and it has worked to perfection.

After all, Lazio have the league’s top goalscorer in Ciro Immobile, who has seven goals in seven matches so far this term and averages a goal every 87 minutes.

At 31 years of age, the Euro 2020 winner shows no signs of slowing down from his goalscoring record that has seen him net 131 times over the past five seasons. 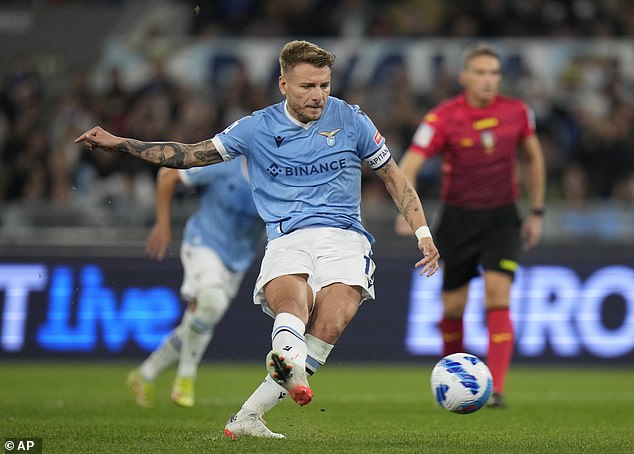 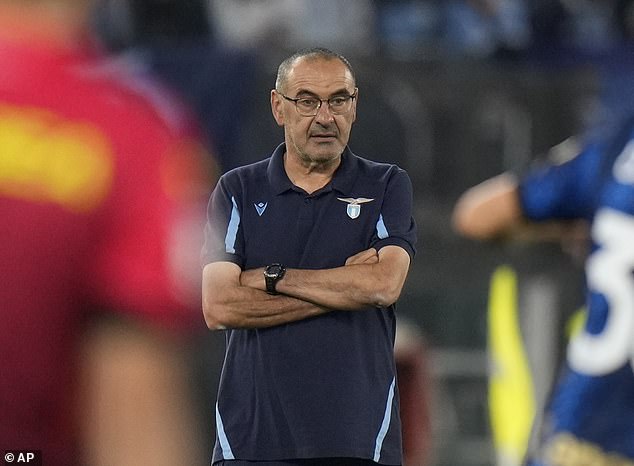 But if Immobile were to have an off day, he does have the support around him to keep Lazio’s guns firing.

Felipe Anderson looks a completely different player from the one that washed up at West Ham, while former Chelsea winger Pedro has started his Lazio career brightly despite being three years olde than Immobile.

And what about Jose Mourinho’s Roma? The Special One’s new venture lead the race for the Champions League places but Mourinho is not finding the winning formula against the Giallorossi’s title rivals.

Mourinho has lost both of his big-game clashes against Lazio and Juventus so far and needs to find a winning big-game formula soon with Roma, Milan and Inter waiting for him in his next seven league games. 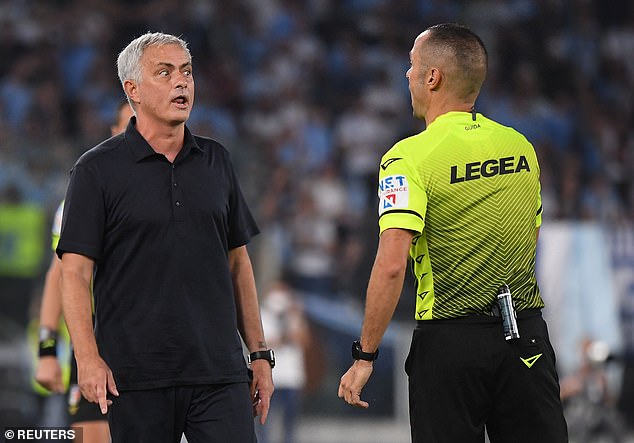 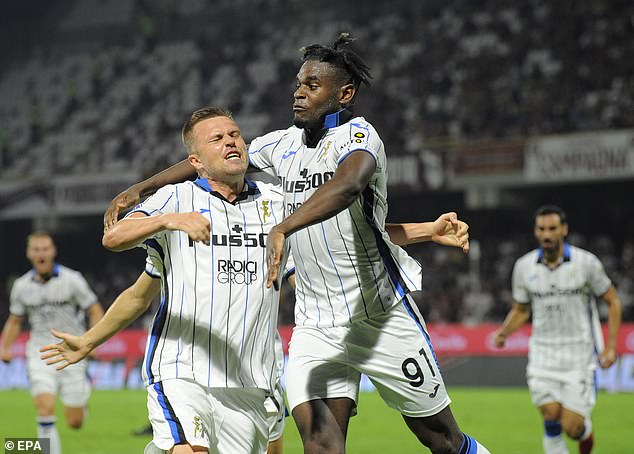 But luck has not exactly been on the iconic Portuguese manager’s side so far this season. Striker Tammy Abraham has hit the woodwork six times since his move from Chelsea while Roma were unfairly denied a goal in their clash with Juventus last weekend.

Atalanta, meanwhile, are always going to be a threat due to their free-scoring nature under Gian Piero Gasperini, but look boosted by the return to form of Josip Ilicic, who scored twice in Sunday’s 4-1 victory over Empoli.

Ilicic was on fire two seasons ago when he netted 21 times as Atalanta reached the Champions League quarter-finals, but off-the-field problems caused issues in his life that threatened to end his career.

The Slovenian striker now looks back to his best and is ready to reignite his partnership with Colombian forward Duvan Zapata, who has four goals in six games so far this season.

Many believed that the loss of Cristiano Ronaldo and Romelu Lukaku made Serie A far less interesting, but with seven teams gunning for the top spots this season – how wrong they are proving to be.

Arizonans sound off on Kyrsten Sinema, opposition to filibuster reform 0