Olympic athletes are sharing moments of triumph – and despair – with their families in real time through live video links within arenas, in an attempt to overcome the Covid ban on supporters in Tokyo.

And new tech is enhancing the experience of TV viewers, which even allows spectators to track the heart rate of nervous competitors as they prepare for critical moments of competition.

The system to link up sports men and women with their loved ones is known as Athlete Moment. It is one of a number of technological innovations at the Games.

The Olympic Broadcasting Service has set up two-way video links so competitors can see the celebrations, or commiserations, of their family and friends back home when they have completed their events.

Team GB gold medallist, Tom Daley, is among those who could go to the monitor and see his joyous family after he had delivered the dives of his life. 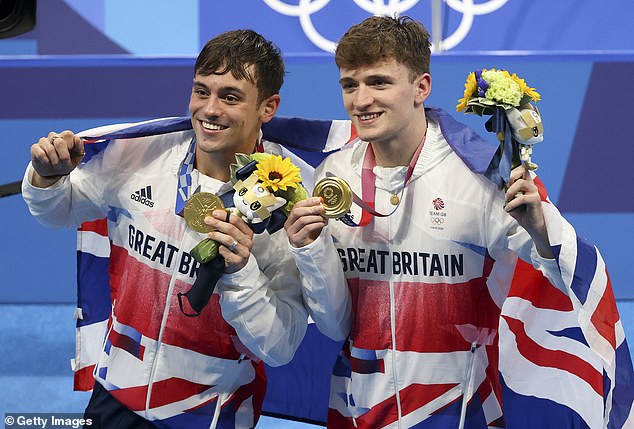 As the divers went to the screen, Tom’s fans could be heard to shout: ‘Show us your medal?’

And the Olympic heroes waved their bling enthusiastically in front of the screens for the people back home. 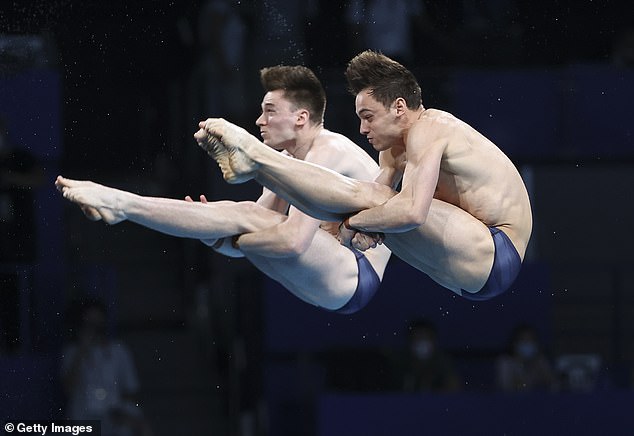 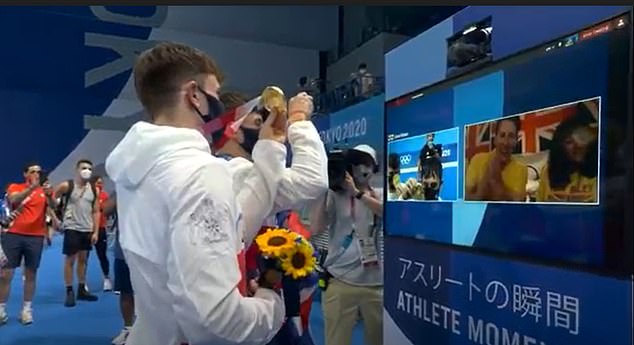 The facility is available in five of the Olympic venues.

After producing the swim of his life to win a silver medal behind Team GB’s Adam Peaty in the men’s 100m breaststroke final, Arno Kamminga of the Netherlands was able to instantly celebrate with his friends, who were waiting for him on a video link.

‘They were on the screen and that feels so special,’ Arno said afterwards. ‘I knew they were with me but to see them right after my race and right after I got my medal, it’s amazing.

Arno Kamminga of the Netherlands was able to instantly celebrate with his friends, who were waiting for him on a video link

‘They’re my special ones – my family, friends and even my old coach, where it all started. To swim good is really nice, but to share it with your family and friends and your loved ones, that makes it even better.’

Hungary’s Omar Salim just missed out on a medal in his taekwondo event, but his nearest and dearest were on the screen to cheer him up right after the bronze medal bout.

‘There were a lot of people there!’ explained Omar. ‘We had my mother, my uncle Joseph who has also competed for Hungary in the past, and then a lot of my friends and team-mates who I grew up in taekwondo with. They were all there watching me from different places, and it was so nice to have that support.’

During the pandemic there have been a number of experiments with fan interaction, including in the Premier League. where supporters were given the  chance to appear on a live video wall streamed into stadiums.

‘What we’re working on is incredibly important, and I think it’s here to stay’ said Yiannis Exarchos, CEO of Olympic Broadcast Services, which provides the broadcast feed for rights holders around the world.

‘After the announcement that there would be no international fans allowed into Japan, we felt it was our duty to make sure their voices were heard at the Games, and as such we fast-tracked a few ideas that we had for future games.

‘It was our task to decide how we can use technology to support athletes, as these are Games of human connection. Despite the difficult conditions and procedures. We need to highlight that the world is here, and the world is watching and engaging and supporting the efforts of the athletes.’

In addition to Athlete Moments, the Olympic Broadcasting Service, has created a Fan Zone which allows viewers to upload video of themselves and a virtual cheer to show their appreciation of the athletes.

There have been more than 80 million cheers from the 205 countries participating at the Olympics, so far. 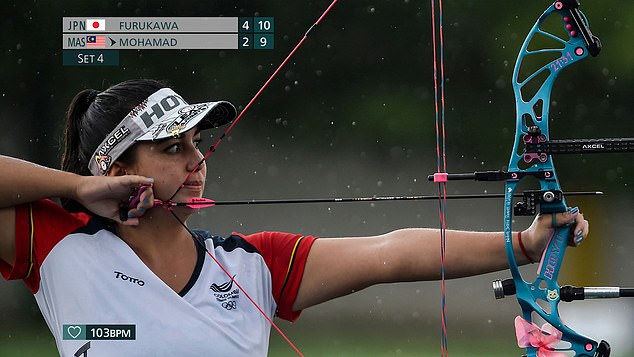 In archery, special cameras and technology can record biometric data from athletes

The innovations are not just to support the athletes. The coverage includes new features that will no doubt shape sports coverage in the years ahead.

In the sprint races, viewers will be able to track the peak speed of the athletes and analyse the different phases of each race.

There are also new insights into what the athletes are going through while they compete, with biometric data providing information about their stress levels.

In archery, four cameras placed 20 metres from the athletes focus on their face and analyse the slight changes of skin colour generated by the contraction of blood vessels from the captured video.

Audiences have been able to watch the heartbeat variations and adrenaline rush experienced by the archer’s body, as they shoot their arrow, through an on-screen graphic using technology from Intel. The data is rendered into a ‘confidence level’ for each shot they have to make. 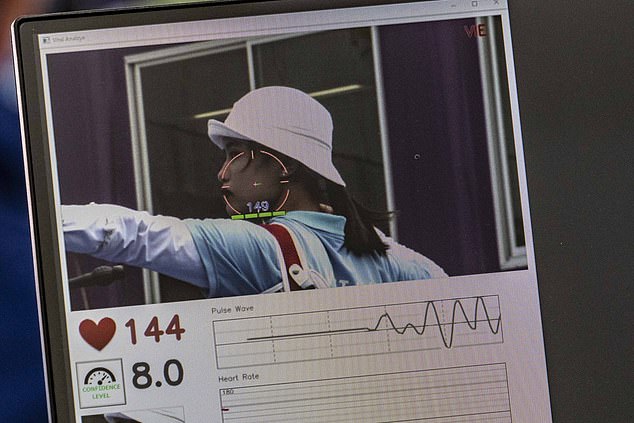 ‘The Olympics have always been a platform for innovation in live sports coverage,’ Sotiris Salamouris, chief technology officer, told Sportsmail.

‘Many important technological changes were either firstly introduced during the Olympics or became widespread once adopted during the Games. The examples are many and impressive: from live satellite contribution, to formats of increased picture quality, to specialized cameras of different types.

‘Once new technologies and production methods have been adopted by the Olympics, there is confidence by the industry for their continuous use from this point onwards and thus become the new ‘standard’ for live sports story telling. This has happened again and again in the past.’