The Lions will never have a better chance of winning an opening Test… and it’s important they do because if they lose, I fear they will get whitewashed.

Both sides have endured all sorts of difficulties during these Covid times, but in that respect the Lions have had a marginally easier ride. The Boks will get better as the series progresses, so the Lions need a quick start.

Since the 2019 Rugby World Cup, the Lions players have participated in two Six Nations tournaments and one Autumn Cup for their countries. Even on this curtailed tour, they have enjoyed six matches if you include the Japan warm-up game at Murrayfield. 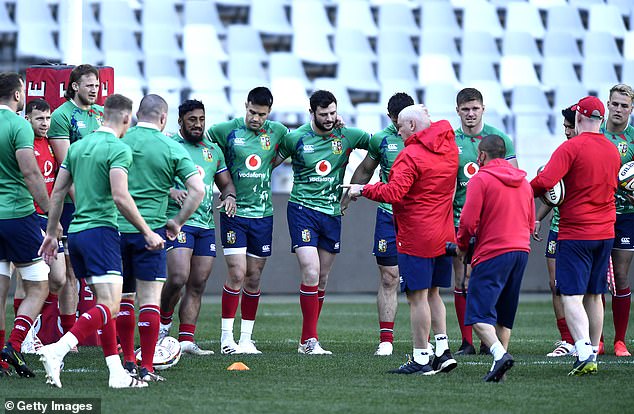 Some of the opposition since they arrived in South Africa has been of inferior quality which is a story in itself going forward, but time spent together as a squad is still priceless.

South Africa, by contrast, have played just one Test since their World Cup triumph, a friendly victory against Georgia a few weeks ago, although the South Africa A match against the Lions was a welcome opportunity to blow the cobwebs out.

Some of their combinations must be rusty, which is why I am expecting a very basic game plan from the Boks. Another thought crosses my mind — if the Lions encounter the Boks side who put away a woeful England in the World Cup final, it’s going to be very difficult indeed.

But I was in Japan and wasn’t really impressed with them against Wales or Japan, nor when they lost to New Zealand. 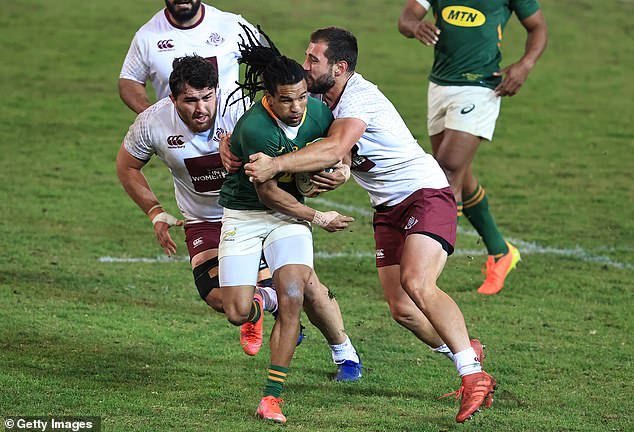 The Boks struck me as a team put together brilliantly in a short time by Rassie Erasmus, who suddenly found their A-game in the final after being written off by most pundits.

It was absolutely perfect timing in fairness but they have been denied the chance to crack on. They haven’t had the opportunity to consolidate that performance and develop as a team.

Can they pick up where they left off in Tokyo 20 months ago? Possibly, possibly not. The Lions must prey on that uncertainty, and, as ever, get out of the blocks quickly.

Covid or no Covid, South Africa will be ready physically. Unless you can match that, you have no chance. Perhaps that’s an old cliche but it’s as true as ever. 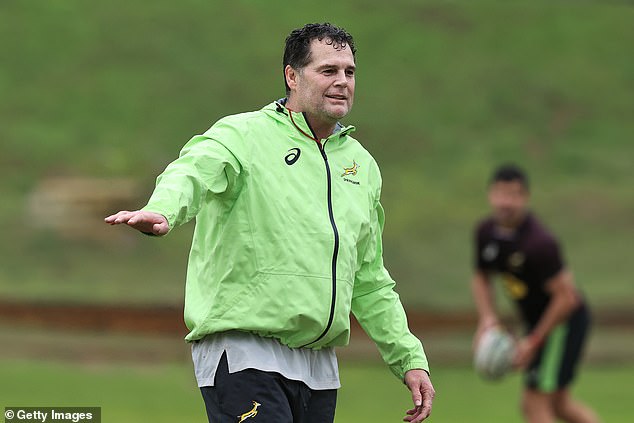 The Lions must be ready to explode out of the blocks — fearless rugby and nothing taken for granted. England got their preparation badly wrong before their final against South Africa.

Playing for the Lions is a great honour but it comes around every four years. Playing against the Lions is an even greater honour — once every 12 years.

The Lions need to match that hunger and urgency. Having a strong contingent of England players, smarting from the near humiliation of the World Cup final, will help. We are about to find out exactly how good the world champions are and if the Lions can win the one-on-one battles, they have a major chance.

South Africa do have some amazing players. I’ve always admired Eben Etzebeth and Franco Mostert in the second row and their three front-row forwards on the bench are arguably stronger than the guys they are starting with. Hooker Malcolm Marx is a one-man army of a player. 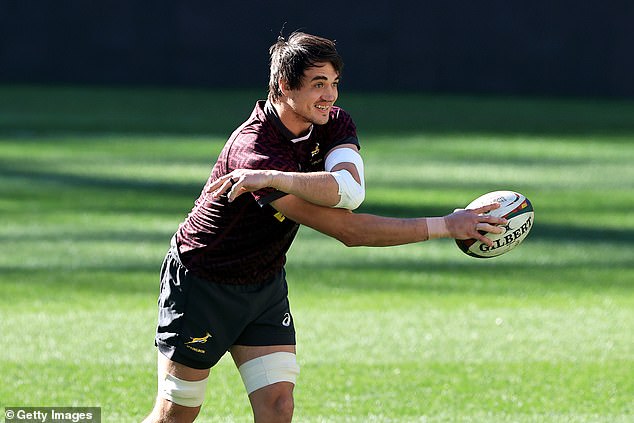 In the back row, Pieter-Steph du Toit was voted World Player of the Year in 2019 and if there had been such an award in 2020, it would possibly have gone to Cheslin Kolbe for his consistent brilliance on the Toulouse wing.

Siya Kolisi is such an inspiring captain at flanker and Faf de Klerk is a talismanic figure at scrum-half who basically runs the show. That is almost always a huge strength for the Boks but it could pose problems if he has an off night or if the Lions can get to him.

Handre Pollard was excellent in the World Cup final and is a player I rate highly, but has since suffered from Covid issues as well as a serious knee injury and played very little rugby. I don’t doubt he is physically fit — the Boks wouldn’t play him otherwise — but is he fully back to speed for the intensity of Test rugby?

The Lions must test that potential vulnerability as quickly as possible and both Courtney Lawes and Tom Curry will be looking to land big, legal, hits from the off and for the entirety of the match. The Boks need Pollard to last the full 80 — his replacement Elton Jantjies is the weak link on their bench and the Lions would be very pleased to see him coming on. My biggest hope for the Lions is that having picked a high-tempo, passing scrum-half in Ali Price and a fleet-footed outside centre with a good passing game in Elliot Daly, they don’t get dragged into a tactical kicking contest with the Boks and in particular De Klerk and Pollard.

The way forward for the Lions is quick ball moved at pace, multiple attacking threats and a clever, unpredictable kicking game to turn some of those big backs like Pollard and Damian de Allende. My biggest fear is that if the scores are level on 50-55 minutes, the Boks will bring on the ‘bomb squad’ and proceed to strangle the life out of the game.

To counter that, my gut instinct is that the Lions must have a decent lead at this juncture — say 10 points — which will make the Boks chase the game a little and possibly open up even more points-scoring opportunities for the Lions.

The Lions must be clinical, convert their try chances but also be clever. Take every point-scoring opportunity and every penalty going. If the Boks defence is holding up initially — and remember they have yet to concede a try in three World Cup finals and they will look upon this as another one — don’t forget the drop goal. Three points here, another three points there, it quickly mounts up in these games. 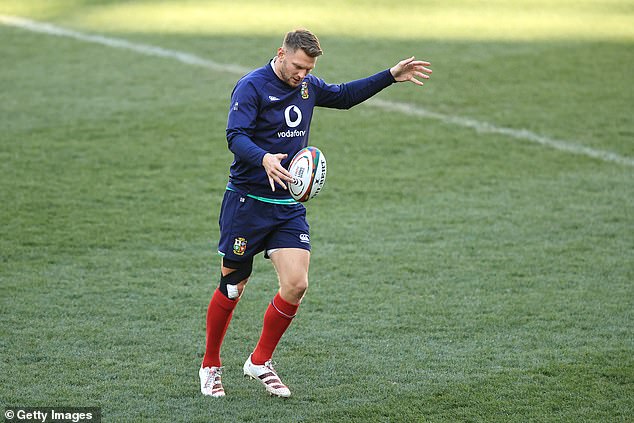 Dan Biggar is very adept at them. Stuart Hogg kicked a cracker against Samoa in the World Cup. I’ve seen Daly hit the target as well — in fact, he landed a difficult drop-goal conversion from out wide against Ireland in the last Six Nations when England were racing against the clock.

The tourists must not cough up needless penalties and allow Pollard too much leeway. He is a cracking kicker and will make you pay dearly. I’m not that familiar with Nic Berry as a referee but the Lions will have done their homework. They need to keep the penalty count down to six or seven, even lower if possible.

Finally, the lack of a crowd. I have no idea how this will play out and it seems especially strange now that we are enjoying a great summer of sport back here in front of big live audiences. 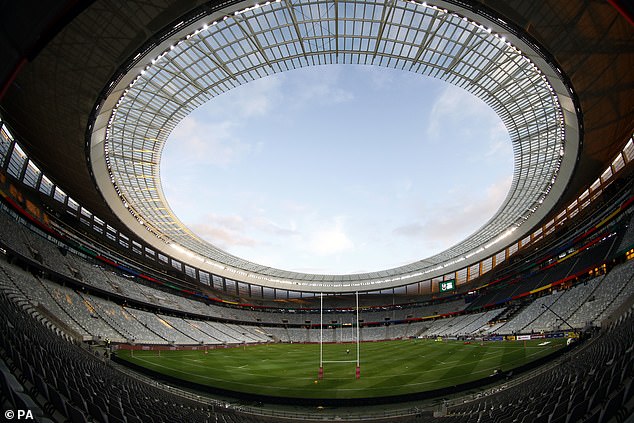 Both sets of players have played in front of empty stadiums a lot recently but this still feels like uncharted territory. A Lions Test played in front of just the replacements and backroom staff — that’s still a little too weird to properly process. Imagine being a player, dreaming of becoming a Lion — or a Bok who has waited 12 years for this chance — and running out to a silent pitch surrounded by a concrete bowl of empty seats?

In the past, the intimidating South African supporters were a big factor — they could get into your heads — but in 1997 and 2009 it seemed to me that the bigger part of the crowd were Lions fans.

They definitely lifted their side on occasions but this time won’t be there to play their part. The teams will have to create their own atmosphere and again, that’s where the physicality will count.

I’m getting nervous writing and thinking about this game. We are entering the unknown and it feels so different from any previous Lions game but I look at the talent they possess and the experience of their skipper Alun Wyn Jones and think Gatland must back them. The Lions by one point.