By Janine Self for the Daily Mail


The meanest travellers in the Championship did it again on Tuesday night, but Bournemouth were given an unexpected helping hand.

Dominic Solanke grabbed his eighth League goal of the season, a reaction strike after Ryan Christie’s initial effort looked like a routine save for goalkeeper Adam Davies until he spilled it into Solanke’s path.

The leaders did not need a second invitation and Scott Parker’s unbeaten team go marching on. This was a sixth clean sheet on their travels and against a Stoke side who had previously been unbeaten at home. 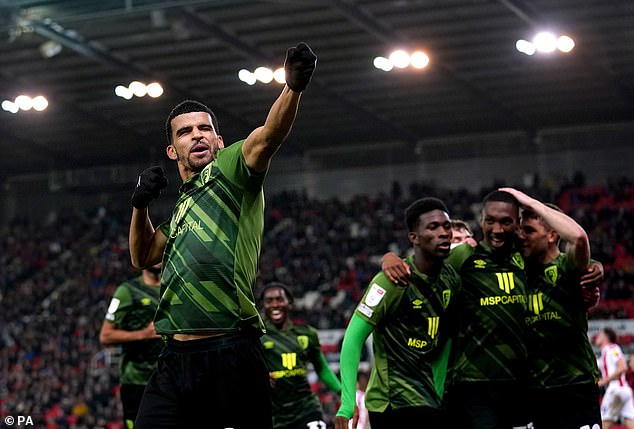 It is coming up to two years since Michael O’Neill took over at Stoke and this was his 100th game as Potters manager.

On the face of it, this match should have been a cracker. Leaders Bournemouth have been electric home and away and started the night top of the table on 28 points, three clear of West Brom.

Scott Parker’s team could also boast no defeats on their travels with four wins, two draws and five clean sheets on the road.

The Potters have been equally impressive at home, winning five and drawing the other.

Strangely, though, the teams both seemed constrained in what threatened to be the cagiest of contests and it was only after Bournemouth scored that the match ignited.

Jacob Brown’s gentle effort after being picked out by Sam Clucas was the highlight of the first half and that was in the first minute.

With the match being shown on Sky, there were swathes of empty seats. You could hardly blame the fans who chose to stay dry but fortress 365 was more like library 365. 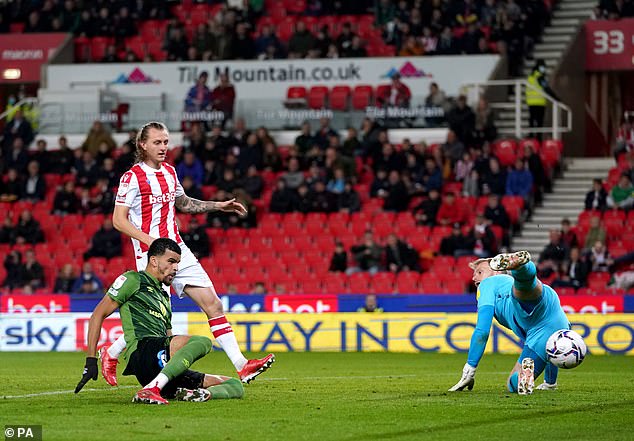 The supporters needed to be given something to generate some atmosphere and an early goal would have gone down nicely.

Jack Stacey caught the eye with a shot straight at Adam Davies and then the Bournemouth player’s cutback set up Philip Billing, whose effort went wide.

There was a blow for Stoke fans as Nick Powell limped off clearly in pain after a clash with Jefferson Lerma. Powell had lengthy treatment for what looked like an ankle injury and returned to action but only for a few minutes. His departure will be a worry to Michael O’Neill. 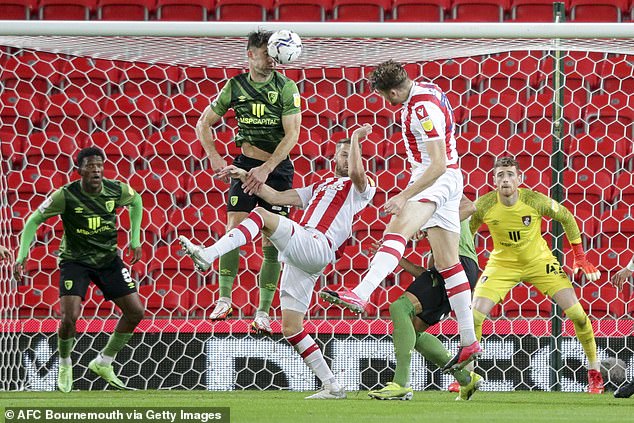 Back to the action, for what it was worth. Clucas found a little space down the left and managed to get his shot in but Mark Travers was down at his near post to deny the opener.

It began to look as if a goalless draw was on the cards, until Solanke struck. Almost immediately the home side had a chance to equalise when Tommy Smith crossed and Jordan Thompson struck a post.

Stoke continued to attack, which left holes for Bournemouth to exploit. Solanke was a constant threat and hit the cross bar. He also had a case for a penalty.

The biggest cheer of the night came when Tyrese Campbell came on for his first game since badly injuring his knee 11 months ago.