A stunning photo showing a spiral of jack fish has won the 2021 BMC Ecology and Evolution annual image competition. Snapped by Kristen Brown from t


A stunning photo showing a spiral of jack fish has won the 2021 BMC Ecology and Evolution annual image competition.

Snapped by Kristen Brown from the University of Pennsylvania, the winning entry depicts the jack fish school at Heron Island in Australia’s Great Barrier Reef.

BMC calls it a ‘visual metaphor for the spiralling crisis unfolding within our oceans’ due to the climate crisis, which is a particular threat to the famous reef on the Australian east coast.

Among the other commended entries in this year’s competition are a shot of a wasp and its spider prey in Ecuador, a giant gladiator frog moments before being attacked by a snake, and a doomed crustacean sporting what looks like a ‘fur coat’ due to a parasitic infection. 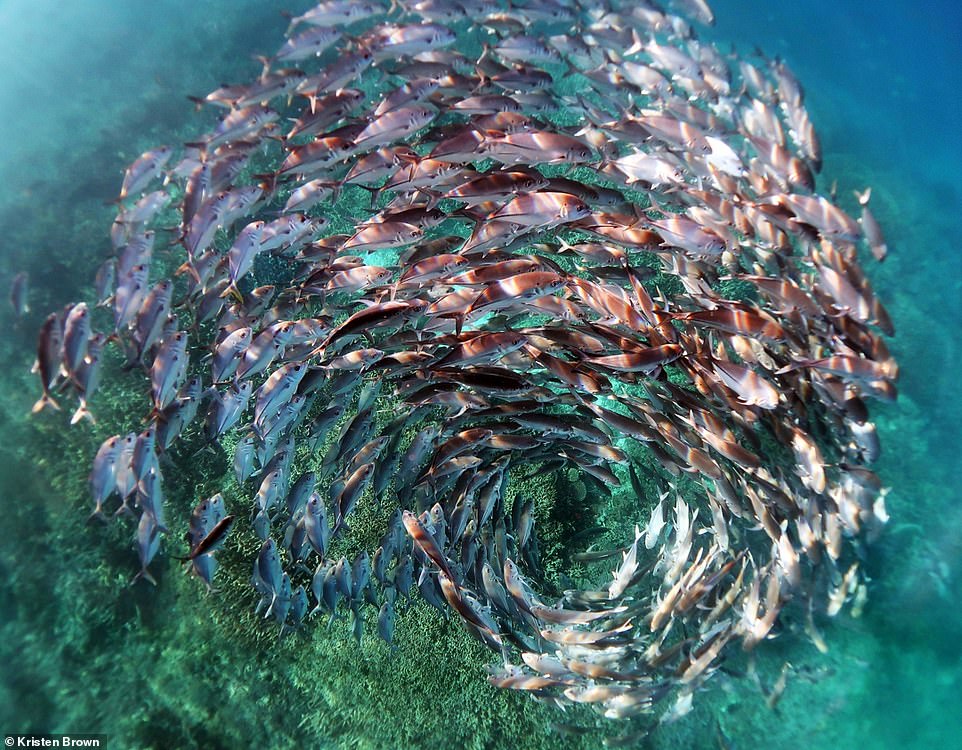 Overall winner and best image for ‘conservation biology’: A school of jack fish in a spiral formation at Heron Island in the Great Barrier Reef 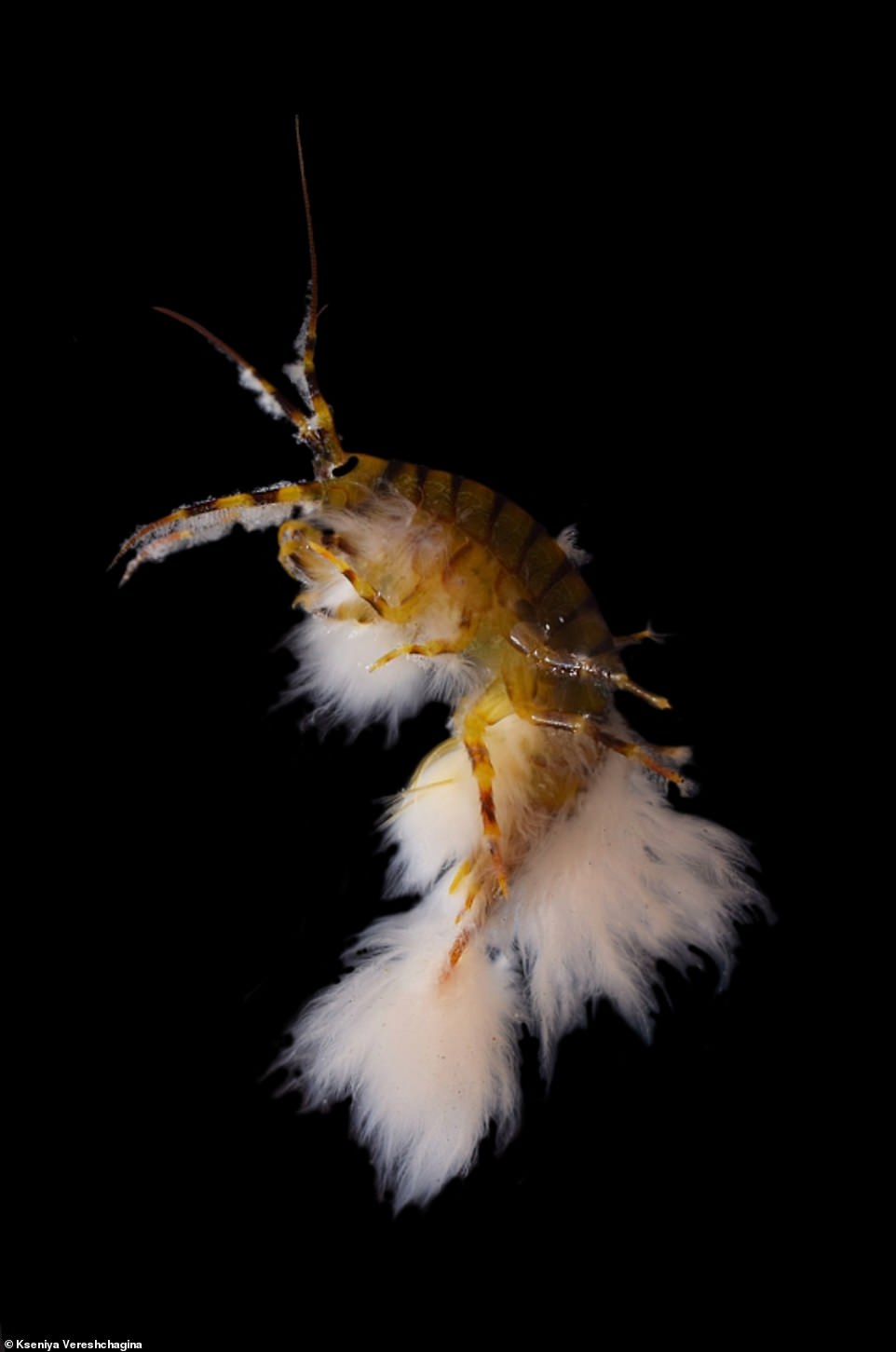 Eulimnogammarus verrucosus, a species of crustacean endemic to Russia’s Lake Baikal, is pictured suffering from a parasitic ciliate infection – which makes it look as though it’s sporting a ‘fur coat’

Section editor Josef Settele at BMC, who recommended the winning entry, said: ‘Marine biodiversity sustains life and the health of our planet, but human activities are threatening the well-being of the world’s oceans.

‘Kristen Brown’s striking image is a symbol for the need for concentrated efforts to manage biodiversity loss and set conservation priorities.’

Brown herself said the image ‘represents both the beauty and bounty of our oceans’ as well as ‘the spiralling crisis unfolding within the marine environment’.

‘Coral reefs with high coral cover and plentiful fish populations like this one at Heron Island on the Great Barrier Reef are sadly becoming rarer,’ she said.

‘Without a concentrated effort to reduce greenhouse gas emissions and improve water quality, coral reefs as we know them are at risk of disappearing within our lifetime.’

The runner-up – which was also best image for ‘evolutionary developmental biology and biodiversity – was snapped by Kseniya Vereshchagina, a biologist at Irkutsk State University in Russia.

It shows Eulimnogammarus verrucosus, a species of crustacean endemic to Russia’s Lake Baikal, suffering from a parasitic ciliate infection.

‘Unfortunately, the crustaceans dressed in such a “fur coat” are sentenced, since the ciliates parasitising them lead endemics to rapid death.’

The ‘population ecology’ winner was captured by Roberto García-Roa from University of Valencia, Spain, who also submitted the winning images for the ‘behavioural ecology’ and ‘human evolution and ecology’ categories.

It shows soldier termites migrating along a length of abandoned rope in a Malaysian forest.

‘Thousands of soldier termites are able to migrate in a complex social environment where each individual has its own mission framed altogether in a global objective: the survivorship and reproduction of the colony,’ said García-Roa.

‘In this case, these termites used meters of an abandoned rope to move across the Malaysian forest. Once humans disappear, nature recovers its space and uses what is needed to survive.’ 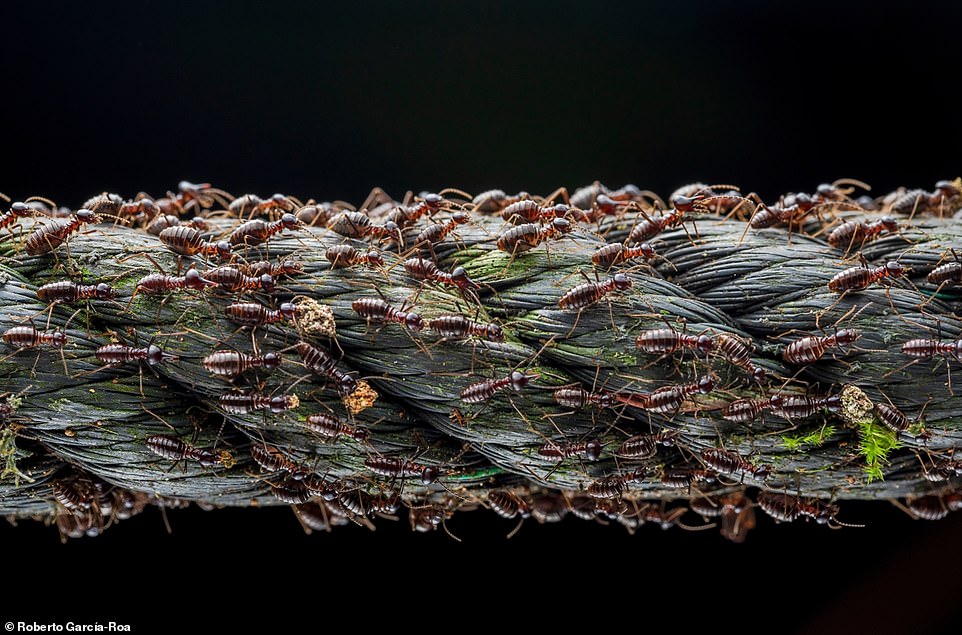 Pictured, thousands of soldier termites migrating along a length of abandoned rope in a Malaysian forest. The shot was the winner in the ‘population ecology’ category 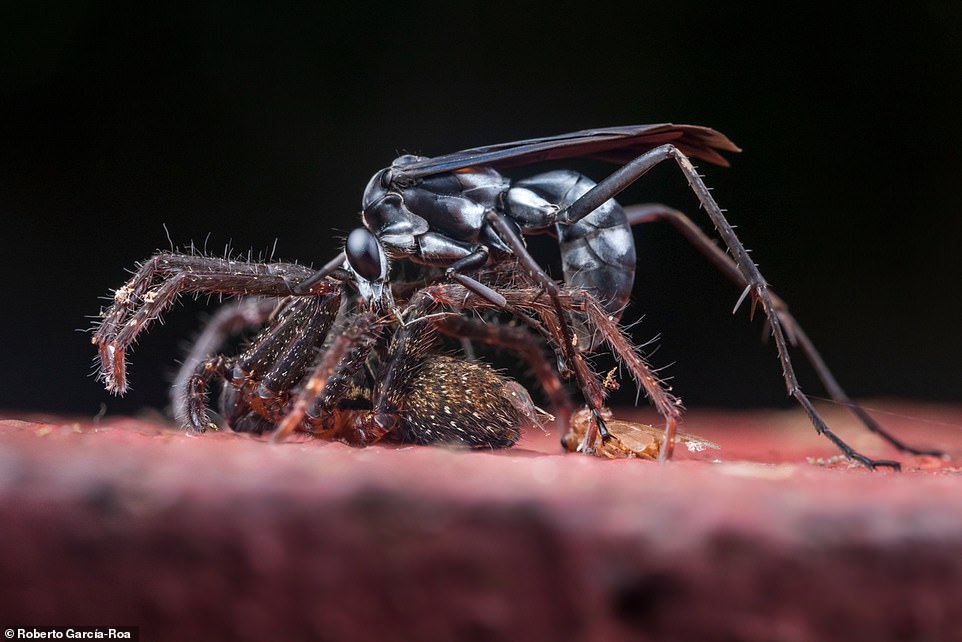 An ‘epic scene’ showing a battle between a wasp and its much larger spider prey in Tiputini, Ecuador. The shot won best image for ‘behavioural ecology’

García-Roa’s shot entitled ‘The Hunter’ (the best image for ‘behavioural ecology’) depicts a wasp and its much larger spider prey in Tiputini, Ecuador.

‘Spiders are one of the most sophisticated hunters on earth,’ he said. ‘Nevertheless, they cannot escape from what evolution has provided to other species.

‘In particular, some groups of wasps are specialised in hunting spiders and use them as a trophic resource for their larvae. I found this epic scene in a wall of a biological station in Tiputini, Ecuador.’

García-Roa’s third image (the best image for ‘human evolution and ecology’) entitled ‘Learning to Be Human’ shows a researcher using a baboon to study the evolution of human locomotion.

The curious photo of the baboon on a treadmill was captured at the Station of Primatology in the south of France during research into the evolution of bipedalism – walking on two limbs.

It shows a zebrafish that regrew its tail fin only two weeks after the appendage was clipped. 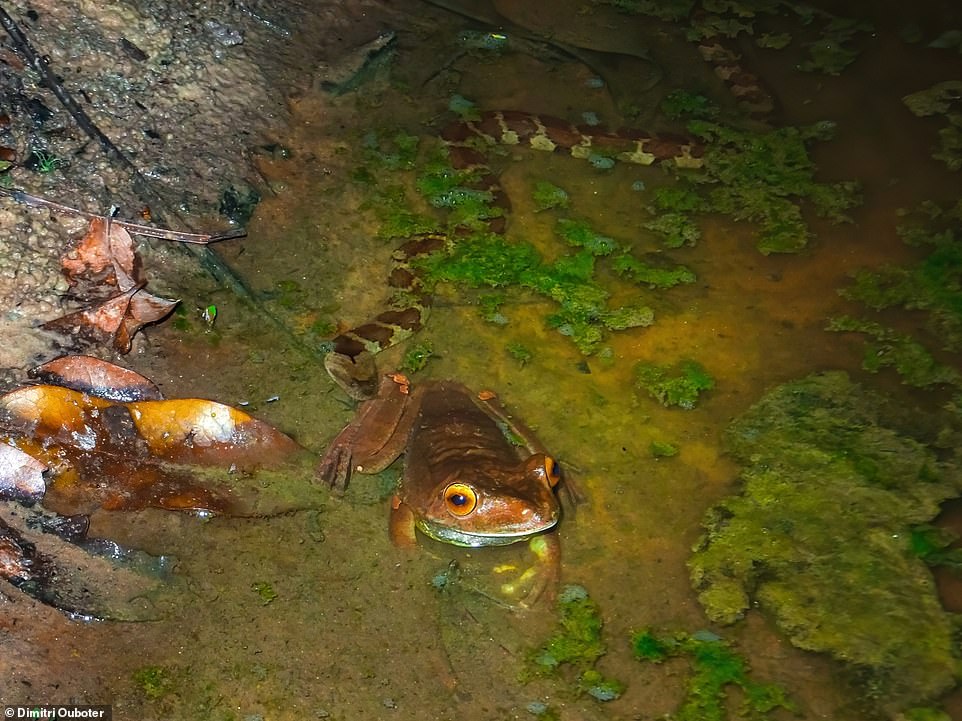 ‘Editor’s pick’: ‘Eerie Stalker’ shows a giant gladiator frog prior to its escape from a snake. Seconds after this photo was taken, the snake struck out at the frog, which managed to get away 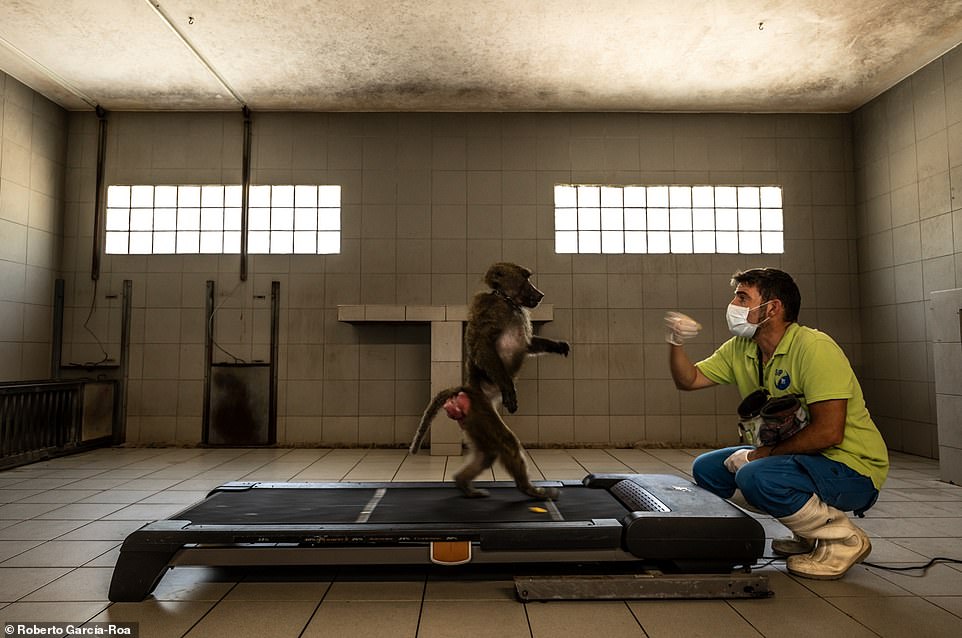 Best image for ‘human evolution and ecology’: ‘Learning to Be Human’ captures a researcher using a baboon to study the evolution of human locomotion

Many primitive vertebrates such as zebrafsh have a spectacular ability to regenerate various tissues after traumatic injury.

‘Whether regeneration is a primitive or adaptive trait to environmental conditions is the subject of much debate, and the mechanisms underlying the regeneration process are not yet fully understood.’

Lastly, the editor’s pick is entitled ‘Eerie Stalker’ and was taken by Dimitri Ouboter from the Institute for Neotropical Wildlife and Environmental Studies in Suriname, South America. 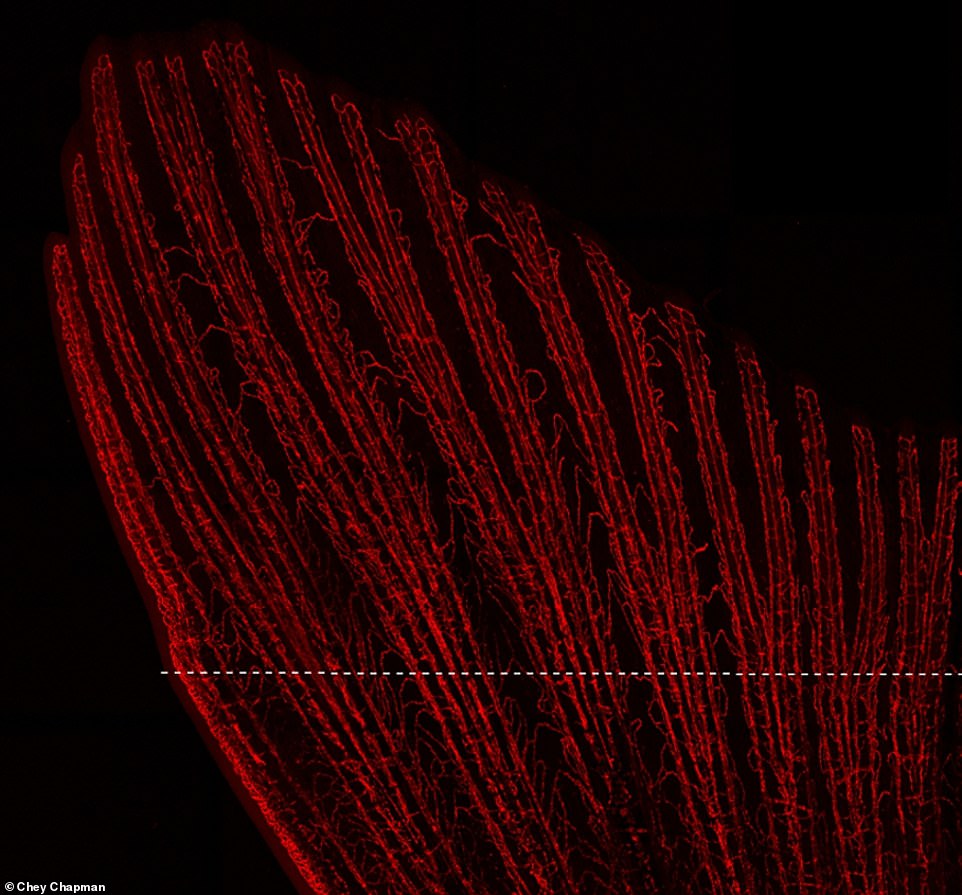 Best image for ‘ecological developmental biology’: A zebrafish regrew its tail fin only two weeks after the appendage was clipped at the white horizontal dotted line

‘It isn’t often you come upon the behavioural interaction of two species so I was ecstatic to be able to capture part of it,’ said Ouboter.

‘I was walking at night surveying some pools when I saw this snake sneak up on a frog. Seconds after this photo was taken, the snake (Helicops angulatus) struck out at this giant gladiator frog (Boana boans).

‘The frog got away – all the better as it may have been a meal too big to handle for the snake. If it had succeeded in biting the frog, the fight would have been far from over.

‘This species of frog has been observed to escape from the jaws of snakes on at least two occasions, employing multiple defensive techniques such as emitting distress calls, jumping and lung infation, making it harder for small snakes to hold on to them. Excellent survival strategies.’

All the successful entries are detailed in BMC Ecology and Evolution, which is an open access, peer-reviewed journal dedicated to all aspects of ecological and evolutionary biology.

Last year, the winner of the 2020 BMC Ecology image competition was a shot of a magnificent frigatebird chick dying of a viral infection in French Guiana.

Snapchat down: Snapchat not opening and app crashing tonight 0