When Alex Rose was approached by his Chemistry teacher (and then-track and field coach) at the age of 15 with a view to joining the athletics team, neither of them could have imagined where that schoolboy would be now.

Ranked seventh in the world in the discus, competing in the Olympic Games, the pinnacle of his sport, and chosen as the flag-bearer for his country. A country, give or take, 6,700 miles away from his birthplace in West Branch, Michigan.

But the tiny island of Samoa is close to his heart, and his pride at the chance to represent them is as vivid and evocative as the traditional, symbolic Polynesian tattoo inked across his left side which tells his life story. 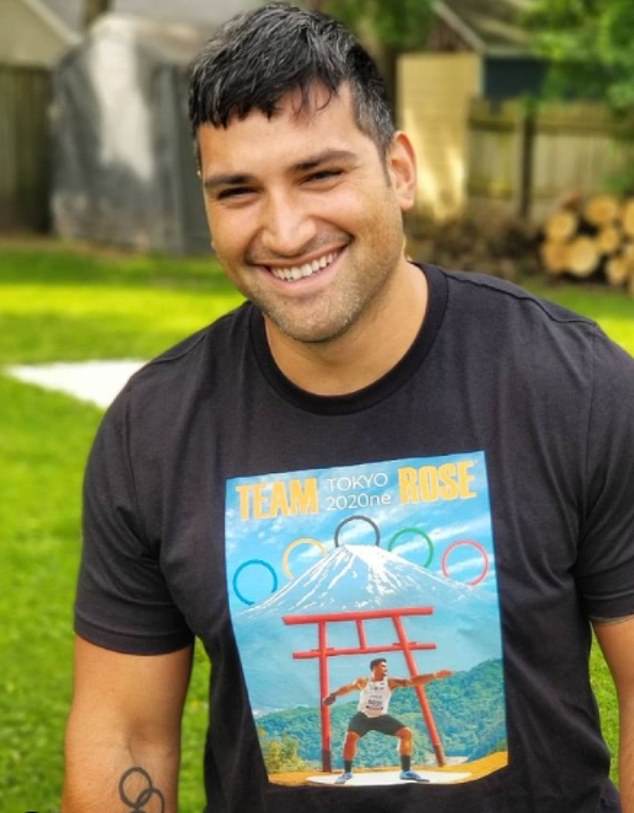 Around a decade ago, he received an email in broken English from Athletics Samoa, asking if he would consider turning out in their colours. Saying yes would take him on a journey connecting him more deeply to his cultural and familial heritage.

Speaking exclusively to Sportsmail the day before he flew to Tokyo, he said: ‘It was a good opportunity for me to immerse myself in the culture, travel and, most importantly, meet family. My dad was so happy. My father was born and raised in Samoa, by Tafatafa Beach in Falealili, so he was very immersed in Samoan culture.

‘After I started competing for Samoa, I had all these questions for him. I kept asking, ‘how do I say this or that’ and ‘what do I do in this situation’ when I was visiting the island or travelling with Samoan team-mates – it’s been quite the experience.

‘It was fantastic (going to the island). The first person I saw there was my aunt, she was weeping with joy and it was a special moment. If I had never competed for Samoa, I would never have had the opportunities to go out there and meet my family and see my roots, where I came from.’

But in 2018, two years after competing at the 2016 Rio Games, Rose was still working full-time and his season’s best was about 57 metres. ‘Not good,’ he said, frankly, and admitted he ‘absolutely’ thought about giving up trying to balance work and training. 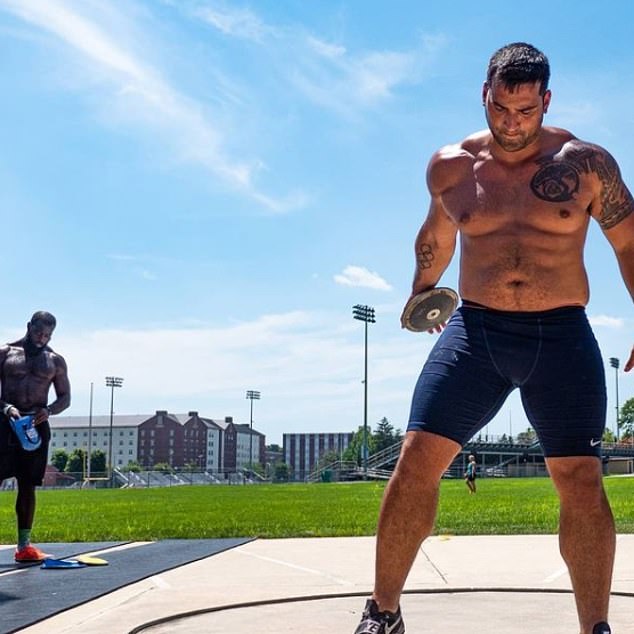 Those doubts are now long behind him, and in the Japanese capital on Friday the 6’2″, 220-pound athlete will wave his country’s flag with ardour, attempting to become the first Samoan of all time to make an Olympic final.

He added: ‘It is an absolute honour. Primarily, I feel very, very sorry for the Samoan athletes who can’t come (due to Covid). I truly want to represent them with as much pride as possible and I’ll be thinking of them when I walk into the ceremony with the flag. I’m extremely grateful for the opportunity to carry the flag for Samoa.

‘I would absolutely love to compete in an Olympic final. With the season I’ve had, I truly think I can do it. Once you get to the final, who knows, maybe I could compete for a medal too.

‘The past few years have been very tough for every Olympian and the fact my wife Samantha has my back and told me to keep following my dreams means everything. I’ve had a long road this year and I’m excited to get to Tokyo and perform my best. I can’t wait.’

He briefly, jokingly, touched on returning to Michigan-based Band Formally Known as Malfoy, in which he’s played guitar and vocals, when he retires. But that is for another day. Alex Rose has records to break, history to make and a country to represent.

‘Magnificent Mary’ will fly the flag for India. She is the only boxer – male or female – to win eight World Championship medals (including six golds) and has also won gold medals at the Commonwealth Games, Asian Games and Asian Championships.

As if that wasn’t enough, she is also a politician – an incumbent MP, Rajya Sabha – an animal rights activist, and a wonderful role model for young girls.

Also making waves is Sri Lankan gymnast Milka Gehani. The teenager, 18, stands at just 4’7″ and is the first gymnast from her country to ever qualify for the Olympics, as well as their youngest ever flag bearer. 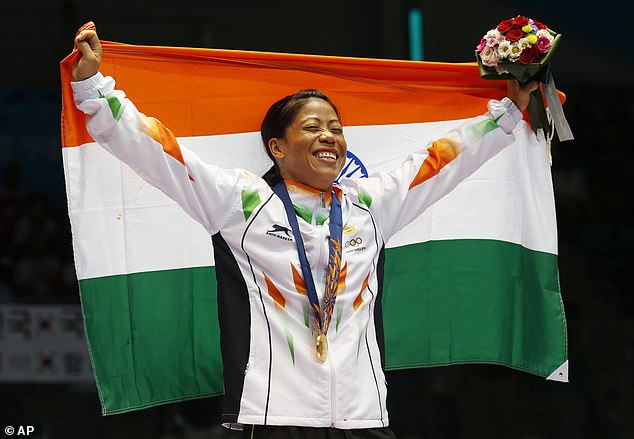 According to the IOC, this will be the first Olympiad with nearly half/half representation of men and women, women making up 48.8 per cent of athletes and at least one man and one woman on every one of the 206 teams, for the first time.

Also flying the flag for female representation is 21-year-old Mongolian 3×3 basketball player Khulan Onolbaatar, the first woman from her country to be a flag bearer.

She said: ‘I’m happy for sure, but the biggest emotion is the pride to be Mongolian. I just can’t wrap my head around the idea that I am given this huge opportunity on the biggest stage in sports, at the Olympics. It is every athlete’s dream.’

He said: ‘It’s a passionate moment I can feel in my bones. As a proud Kokatha, Naghiralgal and Dauareb-Meriam man it’s incredible. I get thrilled and excited about the opportunity to tell people where I’m from. 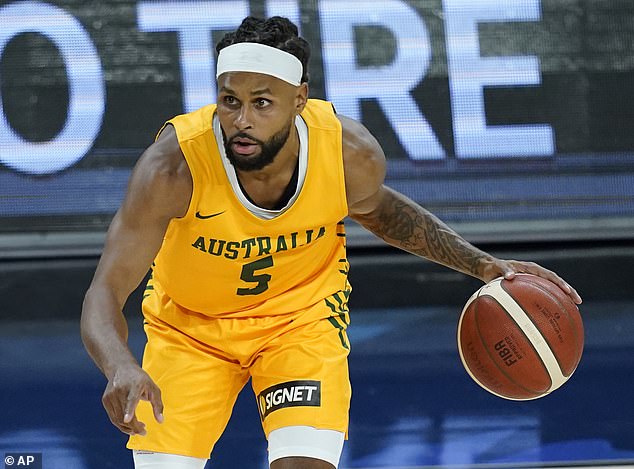 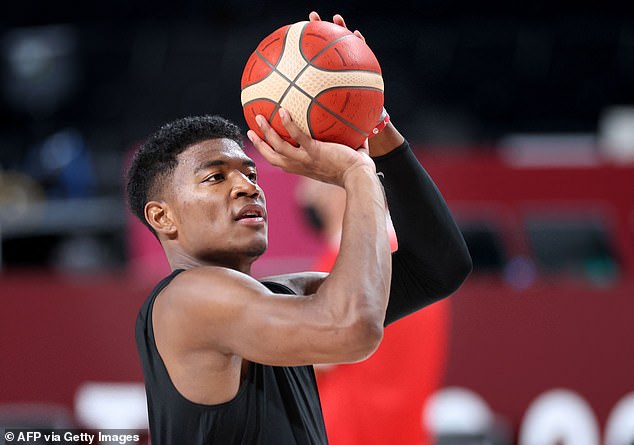 ‘That’s what it’s all about, right? Having the next generation be true to themselves, proud of who they are, their identity, and to wear that on their chests – that can help them achieve their dreams.

‘It’s leadership, representation and it’s insanely meaningful. It’s inspiring. It’s symbolic. It’s emblematic. This is the feeling I think really kick-starts the fire inside me to really use it as a driving force to achieve what I want to achieve in sport.’

Another basketball player, Rui Hachimura, will fly the flag for host nation Japan. Hachimura, born to a Beninese father and a Japanese mother, is a biracial sporting icon in the mould of tennis’ Naomi Osaka – and his visibility is hugely important. 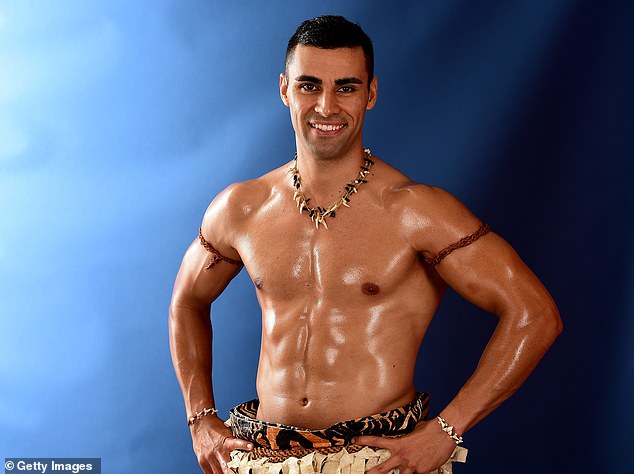 BEST OF THE REST

Tonga pair Pita Taufatofua, who went viral at the Rio 2016 opening ceremony for his oiled-up appearance in traditional dress, and 21-year-old Malia Paseka, should wow the crowds.